Microsoft has added a raft of new features to its office suite, including smart new editing and research tools for Word.

One of Office 365’s new features – a new editing tool for Word called Editor – uses machine learning and natural language processing to help people improve the quality of their writing, according to Microsoft.

Editor is initially limited to pointing out examples of wordiness or redundancy and suggesting simpler or clearer choices (such as "most" instead of "the majority of") and identifying situations where the wrong word or phrase may have been used (like "effect" rather than "affect").

Another new Word tool called Researcher "helps you find and incorporate reliable sources and content for your paper in fewer steps" and even inserts the appropriate citations into the document, according to Microsoft.

The latest version of PowerPoint introduces a new feature called Zoom. This appears to take a cue from Prezi in that allows nonlinear presentations. So instead of being forced to progress from one slide to another in a preordained manner, Zoom lets you navigate through the presentation in whatever order seems most appropriate at the time.

Zoom is initially available only to Office Insiders (Microsoft's preview program for Office 365 subscribers who want to try new features as soon as possible), and only in PowerPoint 2016 for Windows desktops.

Turning to Outlook, the Focused Inbox feature found in the iOS and Android versions is been added to Outlook for Windows, Mac and on the web. The idea is to separate the most important emails as determined by the content of the messages and by identifying the people you interact with frequently. The feature (pictured at the top of this page) arrives in Outlook.com this week, and in September will extend to Office 365 customers participating in the First Release program. Focused Inbox will eventually replace the Clutter feature.

Another new feature in Outlook is @mentions. The idea is that when writing an email you can type the @ symbol and then select a person from the popup menu. The @mention is highlighted in blue to attract the reader's attention, and the person is added to the To: list if they're not already among the destination addresses. If you are @mentioned in an incoming message, Outlook automatically adjusts the preview text to include the @mention. 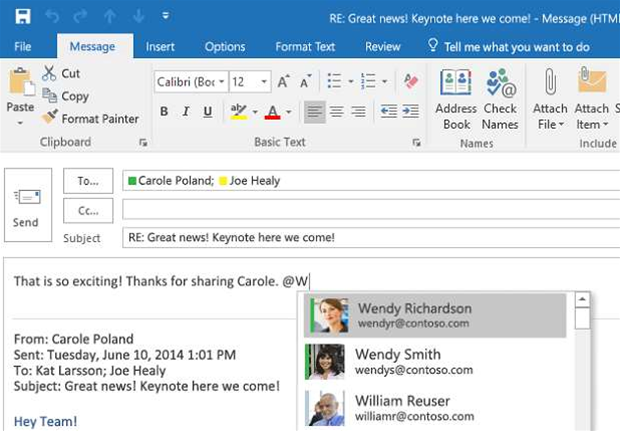 These are just the headline new features. You can find out more about these and other July 2016 updates to Office 365 for Windows, OS X, iOS, Android and Windows tablets and phones.