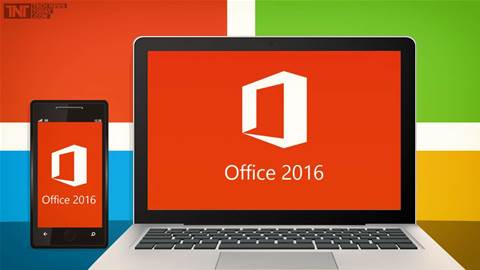 In shocking news for people who just figured out where the "page break preview" is, Microsoft released Office 2016 overnight. The updated suite emphasises collaboration and productivity.

Office 365 Groups (shared inboxes, calendar, notebook and more for self-organising teams) have been integrated with Outlook 2016, and Skype for Business integration has been added to the Office desktop applications to simplify communication and collaboration.

On the productivity side, Outlook 2016 can automatically remove low-priority mail from your inbox. You will go back and look at it later, won't you? No, I didn't think so. It also supports cloud-based attachments stored in OneDrive to help ensure recipients can access the current versions and to avoid clogging email servers with multiple copies of the same attachment.

Excel 2016's charting and business intelligence features have been bolstered.

Productivity features across the suite include automatically synchronised lists of recently used documents, and - from Office 365 - Tell Me to identify the Office feature or command you need, and Smart Lookup to incorporate material from the web in Office documents.

Office 2016 is available as part of an Office 365 subscription, or as a traditional perpetual licence. Office 365 plans including the desktop applications start at $13.20 per user per month (subject to an annual commitment). Perpetual Office 2016 licences for small businesses cost $299 for the Home & Business edition (Word, Excel, PowerPoint, OneNote and Outlook), or $599 for the Professional edition (Word, Excel, PowerPoint, Outlook, Publisher and Access).

The OS X version of Office 2016 was released to Office 365 subscribers a couple of months ago, but is now also available as a perpetual licence at the same $299 price as its Windows counterpart.

Looking further ahead, Microsoft said improvements to OneDrive for Business will appear later this month, including increased file size and volume limits, plus previews of new sync clients for Windows and OS X that will improve reliability and allow selected sync.

Next year, GigJam will graduate from a private preview to become a full-fledged part of Office 2016. GigJam is Microsoft's attempt to streamline ad-hoc business processes such as co-ordinating travel plans or delegating portions of tasks.

Features planned for addition to Office 365 over the coming months - there's a new release each month - include more new charts and forecasting capabilities for Excel, giving Windows 10's Cortana personal assistant access to Office documents, and changes to PowerPoint to make it easier to design and deliver presentations.