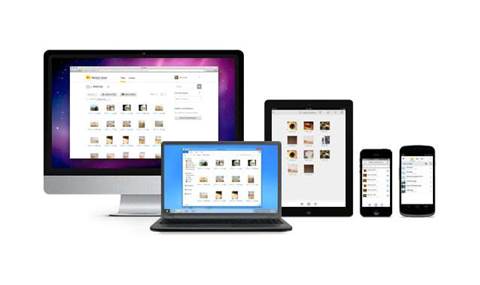 Like DropBox, Norton Zone lets you save your files to the Internet so you can get to them from any computer you're working from.

The ability to easily access your files wherever you are, regardless of the device is one of the big benefits of the cloud revolution.

No longer are our documents trapped on a hard drive - we can now potentially access our work wherever we are.
Services like Dropbox, SkyDrive, Google Drive and others have thrived on our desire to access our data wherever and when we want. The trouble is, security can be a significant issue.
Newsletter Signup

I have read and accept the privacy policy and terms and conditions and by submitting my email address I agree to receive the Business IT newsletter and receive special offers on behalf of Business IT, nextmedia and its valued partners. We will not share your details with third parties.
Symantec has announced Norton Zone, a new secure file sharing service that allows users to safely access, sync and share photos, videos and documents from any of their PC, Mac, Android or iOS devices.
There's a free, limited public Norton Zone beta being offered on a first-come, first-served basis. The full-featured version of Norton Zone is slated to be released in the US in 2013 with other parts of the world to follow.
What is Norton Zone?
Norton Zone works similarly to Dropbox. As soon as a file or folder is added or changed in Norton Zone, all users granted access will automatically see that change on all of their devices, so everyone always has the most up-to-date version at hand.
The free beta version of Norton Zone also keeps track of all versions of the same file for a span of 90 days.

And everything is scanned for malware so that the risk of accidentally sharing an infected file directly from Norton Zone is reduced.

How is Norton Zone different to DropBox?
What separates this from many other similar services is that your files are protected with high-level, industrial-grade encryption.
If a court orders Symantec, the operators of Norton Zone, to hand over access to your data for some reason, the data will be encrypted and only you have the decryption key.

With most cloud services, your data is held offshore and is therefore subject to the laws of those jurisdictions.

For example, with Dropbox, use is subject to US laws such as the Digital Millennium Copyright Act of 1998 and not Australian laws.

There are cloud services with data stored locally, such as Oxygen, which is hosted locally by Ninefold that overcome this.

It also means that the police forces of foreign countries may demand access to your data.

In contrast, Norton Zone can provide authorities with access to your data but they can’t decrypt it as only you have the decryption key. Symantec does not have the key to give to the authorities.

Norton Zone also scans your files for malware whereas Dropbox doesn't.
Even though Norton Zone is currently US based, you can sign up for it from Australia.
Despite all this, it's important to remember that if your username and password combination is compromised that all bets are off.
Disclosure: Symantec paid for Anthony Caurana to fly to San Francisco for a product briefing covering Norton Zone.
Copyright © BIT (Business IT). All rights reserved.
Tags:
decryption dropbox encryption files key norton share software zone
By Anthony Caruana
Dec 6 2012
10:32AM