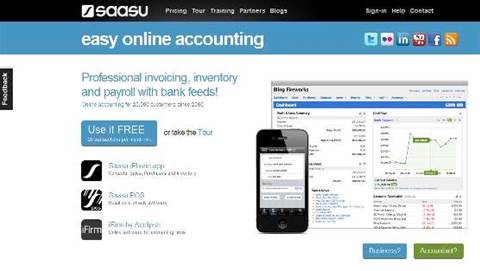 Saasu could be regarded as the quiet achiever of cloud accounting. The company doesn't attract the media spotlight the way MYOB and Xero do, but it's plugging away adding features to its accounting system.

A few months ago, Saasu added support for online payments via Braintree, eWay or Stripe. This capability adds a 'Pay now' button to online invoices, and if the customer chooses to use it a receipt is generated by the system and the payment is automatically reconciled in Saasu.

The idea is that the easier you make it for people to pay, the more likely they are to pay on time. And the more you can automate accounting functions, the more time you can spend on the things that really matter to your business and your life.

Sticking with the automation theme, Saasu has just made available a beta release of its integration with Zapier.

Zapier is a service that automates the integration of other cloud services. The 'recipes' that Zapier uses are called Zaps, and they can be created by anyone with moderate knowledge of the two apps.

Sample Zaps created by Saasu include creating new Saasu contacts from Zoho CRM or from a PayPal successful sale, and creating or updating Mailchimp or Campaign Monitor contacts from Saasu.