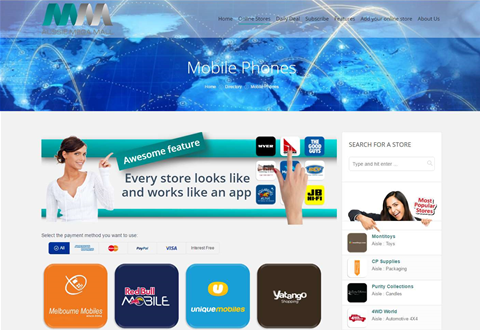 According to founder and CEO Darryl Reeves: “In a growing number of categories of retail, it's getting difficult to get an Australian retailer on the first page or two of search engines now.”

Aussie Mega Mall says it has signed up more than 3,500 Australian online stores in a wide range of categories, including air conditioning, body and beauty, coffee, uniforms, vegan, and wheels and tyres.

Tenants include well-known brands such as Harvey Norman, Appliances Online, The Body Shop and Bob Jane T-Marts, as well as smaller etailers such as elf Cosmetics, Custom Coffees and Vegan Online.

How does it work? Well, you can see for yourself by visiting the website, but essentially it's a fancy online directory that allows you to browse through 'aisles', each of which represents a category.

When you click on a retailer's icon you're taken to its own website. It's simple but potentially useful, because at least you know that you are looking at is an Australian business – unlike some platforms where a supposedly local firm actually stocks and ships products from offshore.

“Drop shipping could well be the death-knell for many Australian online stores if we do not unite and showcase collectively,” said Reeves. “Drop shipping is doing to Australian online stores what the large grocery chains have done to the small corner store – put them out of business! We want to give the small online business owner all the support we can.”

A handy feature for shoppers is the ability to filter merchants according to their payment options.

“Many businesses can be Skyped directly from the site. We're the only business Skype directory anywhere as far as I know,” added Reeves.

Online stores are listed free of charge. Aussie Mega Mall's business model appears to be to charge for certain features, such as premium listing positions.