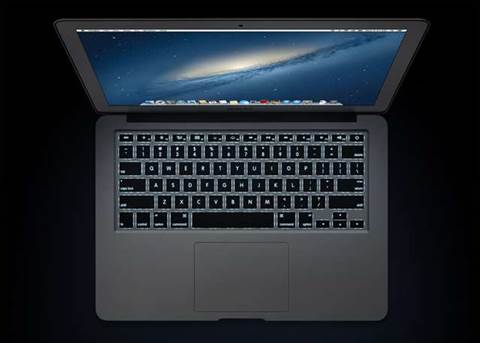 Today's announcement of a new MacBook Air with up to 12 hours battery life is good news for anyone who works away from their desk.

Of all the new features in the new MacBook Air laptops announced by Apple today, the one we're most excited about is the battery life.
Apple today announced that its new 13-inch MacBook Air will run for up to 12 hours on a single charge, and up to 10 hours for the new 11-inch model.
Newsletter Signup

I have read and accept the privacy policy and terms and conditions and by submitting my email address I agree to receive the Business IT newsletter and receive special offers on behalf of Business IT, nextmedia and its valued partners. We will not share your details with third parties.
It's using the term "all day battery life" in its advertising, which isn't technically correct,
Of course the real question is whether the new MacBook Air laptops will actually run for that long in the real world. In years past, battery ratings were a bit like fuel economy figures in cars - a number designed to give you an idea of how one product compares to another, but not an accurate measurement of how it will perform in the real world.
Like some other laptop makers, when Apple records how long a MacBook Air lasts on battery power, it at least makes sure some sort of activity happening on the laptop - so you know they haven’t cheated by leaving the machine idle.
So how did they come up with their "all day" claim? To Apple's credit, they leave wireless on during their test, which involved wirelessly browsing "25 popular web sites with display brightness set to 12 clicks from the bottom or 75 per cent".
Just to further prove these figures aren't completely pie-in-the-sky, Apple also runs a test where it plays an HD movie (720p, not 1080p), under the same conditions as above (though the web site isn't clear on whether wireless is turned on). Impressively, the 13-inch Air lasted for 10 hours in this test, and the 11-inch Air lasted for nine.
Compare this to the MacBook Air models released around this time a year ago - last year's 13-inch Air was advertised with up to 7 hours and the 11-inch with up to 5 hours.
So why is the official battery life of the new Air so much better? Apple states that the compact size of the SSD, the on-board storage for all your data, leaves room "for a big battery".
The new MacBook Airs also have the new Intel processor - called the "fourth-generation" Intel Core i5 and i7 processors. These chips are designed with power efficiency in mind.
So what else is new with the new MacBook Airs? As well as the new Intel chips, the SSD is faster, which will help the Air wake-up from sleep state quicker than ever. The Air also now works with a new generation of faster WiFi - called 802.11ac. This might be handy if, for example you are a photographer needing to transfer and backup lots of large files. You won't see any benefit though, unless you your WiFi router and other WiFi equipment is 802.11ac compatible - Apple has announced a new version of its AirPort Time Capsule backup hardware that is 802.11ac compatible with 2TB or 2TB hard drives for $349 or $449.

How much does the new Apple MacBook Air cost?