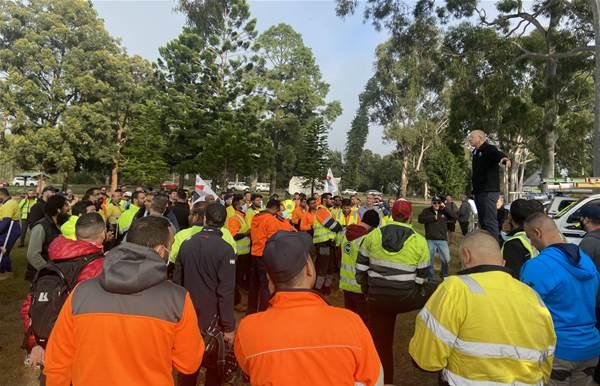 NBN technicians that are part of the Communications, Electrical and Plumbing Union of Australia (CEPU) have walked off the job to protest the reduction of their pay rates.

CRN understands the union is marching to the NBN Co offices to make their concerns heard, after voting in favour of a work stoppage following a meeting held in Sydney’s Parramatta Park earlier today.

The union informed its members yesterday of a meeting this morning to discuss the best course of action to make their concerns heard, including potentially walking off the job in protest over reductions of subcontractor pay rates.

The CEPU said the pay cuts were “a debacle” affecting job bookings and scheduling, alleged pyramid sham contracting arrangements and what it calls overall poor treatment of workers.

“The mismanagement of Australia’s NBN network continues to be left unaddressed and workers have had enough,” CEPU national president and NSW/ACT branch secretary Shane Murphy said.

“Subcontractors are fed up with cuts to their pay and a shambolic booking system which is leaving subcontractors and NBN customers high and dry.”

Murphy said subcontractors are being forced to sign new contracts with NBN Co delivery partners, which resulted in a reduction in their pay rates.

“These NBN Co subcontractors have continued to keep the country’s internet services connected during the COVID-19 pandemic, turning up for work day in, day out. They deserve better from NBN Co,” Murphy added.

“These technicians are highly skilled workers – yet because of the NBN’s ‘pyramid style’ sham contracting scheme, it’s the executives and middle-men who are profiting from Australia’s NBN while the people doing the work are getting get ripped off and consumers continue to suffer with substandard connections.”

Last year, the CEPU said that NBN Co recently changed its model by contracting work to 'delivery partners', who themselves sub-contract that work to 'principal contractors', who would either subcontract the work again or hire low paid, under skilled workers to complete a job they haven’t been properly trained to perform.

Apart from overturning the proposed pay cut and getting rid of the alleged sham contracting scheme, workers also seek that NBN Co get rid of the Work app, which the CEPU calls “dodgy”.

CRN has contacted the CEPU for further information.

Updated 3 May 2021, 11:45am: an NBN Co spokesperson has released the following statement:

"We are working constructively with the CEPU and we are seeking to maintain and support strong, productive working relationships with our delivery partners and their respective subcontractors. NBN Co appreciates the ongoing dedication and diligence of the thousands of highly qualified field technicians and network engineers who work hard to maintain the reliability and performance of the NBN network across Australia."

"NBN Co would like to assure customers that it does not expect this morning’s meeting convened by the CEPU to have any impact on normal nbn network operations, new connection or assurance orders to rapidly correct any network faults that may arise."

"NBN Co is aware of some issues that our delivery partners and field technicians have experienced with our recently deployed SMAX-Go mobile application for managing and logging work requests.

"We have significantly improved the app over the last few weeks to address functionality, system performance and general user experience pain-points, and will continue to modify and enhance the app in the next two weeks. We appreciate technicians’ patience while we work to improve the app."