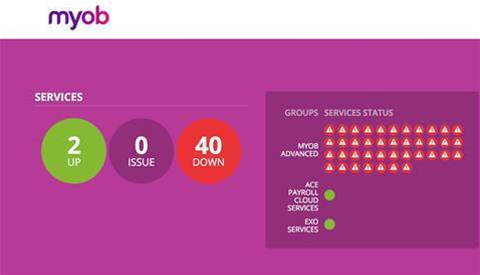 Amazon Web Services suffered database problems in its Sydney region, which had a flow-on impact on big customers including MYOB.

The cloud provider said in a status advisory that its relational database service (RDS) hosted in Sydney was suffering “increased create times and cluster unavailability”.

The problems started at around 7.42am Sydney time and were finally resolved by 1pm, although AWS said it had started to see “recovery for some clusters” around 11.30am.

AWS’ issues in what is officially known as the AP-SOUTHEAST-2 region were not confined only to RDS.

AWS officially confirmed there had been problems with errors on Elastic Beanstalk APIs, though this has also since been resolved.

One of those impacted by the RDS outage was accounting software maker MYOB, who reported having 40 of its services down and just two up.

“Our service provider, AWS, is currently experiencing a database outage,” the company said in an advisory.

“Most customers will be unable to access their sites until the issue has been resolved with AWS.”

MYOB said in an update that 211 of its own customers were impacted by the RDS problems. It continued to suffer some ill-effects for a while but said it had fixed things by 1.32pm.

Update, 6.17pm: A MYOB spokesperson said that the outage impacted one of its products, MYOB Advanced. The spokesperson also said that 211 customers of an "approximately 1.2m total customer base" were impacted.

I have read and accept the privacy policy and terms and conditions and by submitting my email address I agree to receive the Business IT newsletter and receive special offers on behalf of Business IT, nextmedia and its valued partners. We will not share your details with third parties.
Copyright © iTnews. All rights reserved.
Tags:
aws myob outage software
By Ry Crozier
Feb 15 2019
10:23AM