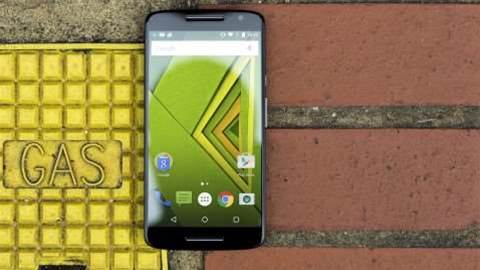 The chunky Motorola Moto X Play is far from sleek, but aims to make up for its lack of prettiness with great battery life

Sitting between the budget Motorola Moto G (2015) and the top-tier Moto X Style, the Moto X Play runs the risk of falling in the shadows of its siblings. But while it has a few issues, the phone's killer price tag, fantastic battery life and 21-megapixel camera all help this mid-range handset stand out from the crowd.

The front of the Moto X Play is a flat stretch of screen tightly flanked by thin bezels, a 5-megapixel camera and symmetrical speaker slits. The back is a slightly curved, soft-touch plastic panel, ribbed for extra grip. It essentially follows the style Motorola has been cultivating for the past couple of years, and it's attractive, if a wee bit chunky at 10.9mm thick. 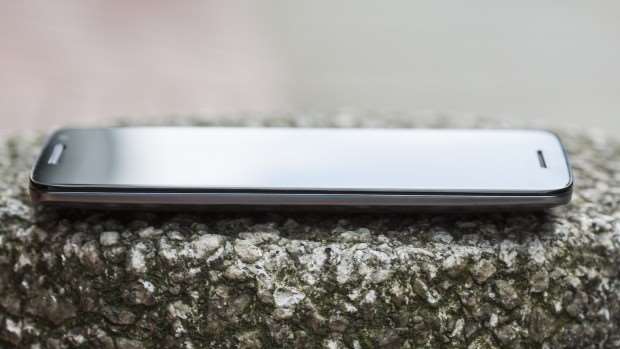 It isn't classically pretty, but I rather liked the sinuous pattern on the back, along with the subtle Motorola insignia and centrally placed camera and flash. That said, it would have been nice to see the grip extend along the smoother plastic edges of the Moto X Play; the 169g handset sometimes felt as if it was about to slide between my fingers when held completely upright.

On the plus side, the Play's display is protected by a layer of tough scratch- and shatter-resistant Gorilla Glass 3. However, if you happen to drop the phone in the toilet because of those slippery edges, it's less likely to survive. Unlike the Motorola Moto G (2015), the Moto X Play is merely water-resistant rated to IP52, not fully waterproof.

Bathroom mishaps aside, operating the phone in one hand isn't too much of a problem. The right side of the Moto X Play features a smooth volume rocker, positioned below a ridged power button that lets you distinguish one from the other when fumbling in your pocket. At the bottom of the phone is a micro-USB charging port, while on the top is the nano-SIM and microSD card tray, beside a centrally placed headphone jack. 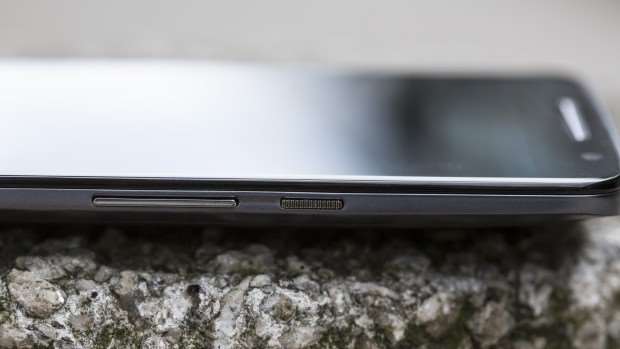 If the black base model isn't to your liking, you can pop out the back and change it to something a little more colourful. Motorola's Moto Maker online customisation service has a range of backs and trims to choose from, and lets you engrave your phone for no extra cost, which is a nice touch.

The first thing to note about the Moto X's 5.5in display is that it's not the highest-resolution panel around. While manufacturers are equipping their high-end flagships with Quad HD monsters, this one is a more humdrum 1080p. It's perfectly sharp, though, and image quality is excellent.

Motorola has given the Moto X Play two different display modes – Normal and Vibrant. Turning the setting to Vibrant gives the colours a little kick to saturation, but the difference isn't major and I found myself sticking to Normal to keep colour accuracy in check. 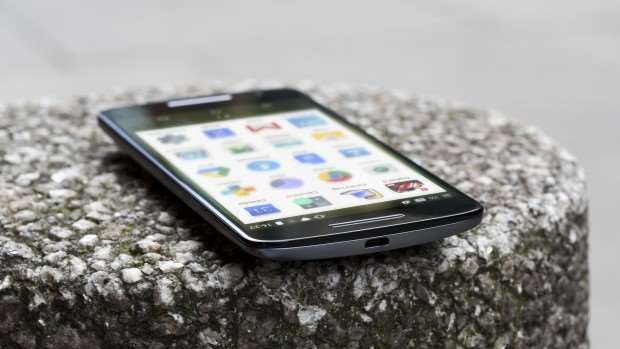 This means the display on the Moto X Play is bright and accurate, with excellent viewing angles, and the high maximum brightness means it's perfectly readable in even the brightest sunlight.

There's a lot to love about the Moto X Play's camera. The 21-megapixel sensor is a big leap from the 13-megapixel sensor of the current Moto G, and it comes with a “CCT” (correlated colour temperature) two-tone flash.

Whipping out your phone and taking a picture involves little more than a quick swipe left on the lockscreen (or a double twist of the wrist), while a simple-to-use manual exposure compensation tool lets you easily manage brightness on the fly. 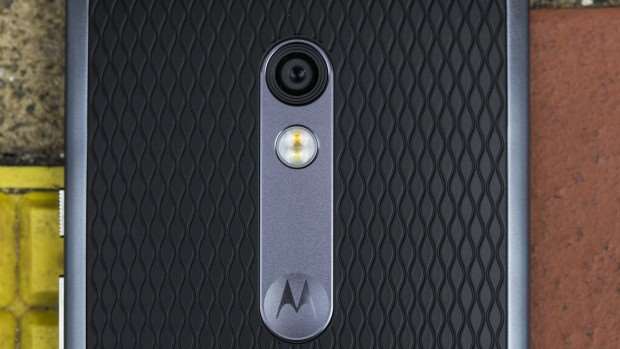 Impressively, the camera has 192 phase-detection autofocus points ranged across the sensor, a feature normally associated with DSLR cameras and higher-end flagship phones, for quicker, more assured autofocus. Also useful is the auto-HDR feature, which removes the need to constantly flip the setting on and off every time you take a shot.

Pictures taken outdoors or indoors in good light are impressive. The shots I took of London's city skyline were sharp, colour-accurate and enormously detailed. Photographing moving subjects wasn't quite as successful, with photos of speeding cars and flailing colleagues a bit hit and miss. The 1080p, 30fps video mode produced solid, smooth video with well-balanced colours, though.

With an f/2 aperture, the camera on the Moto X Play should be good in low light levels, but in practice I found that the handset struggled in these conditions. The impressive detail I witnessed in daylight outdoor shots was absent as noise obscured detail, and photos ended up blurred and grainy. The lack of optical image stabilisation is a big miss here.

The slight heft of the Moto X Play is largely due to the enormous, non-removable 3,630mAh cell tucked under the cover. Motorola put battery life front and centre at the launch of the phone, and it doesn't disappoint. 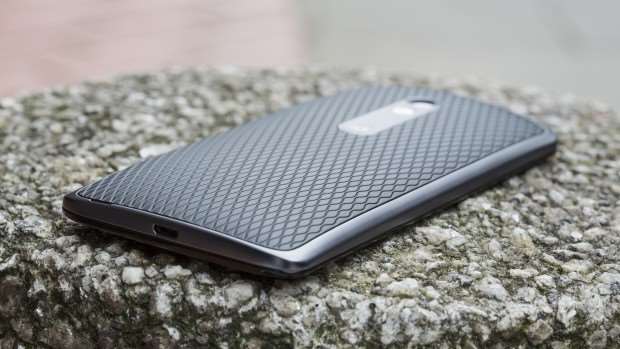 In real-world terms, I found that this was enough to deliver just over a day and a half of heavy use, with email, social networks, browsing and gaming all in regular use. With lighter use you could probably stretch that out to two days. That's a fantastic result, and the phone also supports fast charging, shoving eight hours' worth of juice into your phone in 15 minutes. You'll need to fork out extra for a Turbo Charger, though, as the one in the box is bog-standard.

In terms of core performance components, the Moto X has an octa-core Qualcomm Snapdragon 615 processor, running at up to 1.7GHz, 2GB of RAM and a Qualcomm Adreno 405 GPU. As smartphone processors go, this one has mid-range written all over it, although I didn't come across any major jitters, and playing reasonably graphically intensive games such as Asphalt 8 was a smooth experience.

It might not be able to match the Snapdragon 810 processor in the OnePlus 2 for sheer grunt, but the Moto X Play still managed a respectable set of benchmark scores. In Geekbench 3 it scored 702 and 2,556 in single- and multi-core segments of the test, which is a step up from the Motorola Moto G (2015), which scored 529 and 1,576. But it came nowhere near matching top-end devices such as the Samsung Galaxy S6, which scored 1,485 and 5,282. 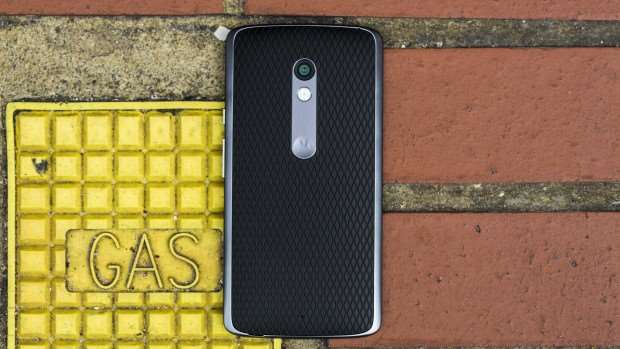 The phone works well in everyday use, too, a recent update having smoothed out the laggy experience some early purchasers experienced. There's still a little stutter when pulling down the notifications menu, but largely the phone feels snappy and responsive, an impression that's reinforced by Motorola's clean – and mostly unfettered – Android 5.1.1 Lollipop installation. As with the rest of Motorola's Moto range, the Moto X Play isn't overburdened with apps and services you may not want or need – unlike some other smartphone brands I could mention.

Motorola has also squeezed in most of the features you'd expect in a modern smartphone. Although you get no fingerprint reader, and Wi-Fi is limited to 802.11n, there is near-field communication (NFC), 4G support and Bluetooth LE – so connecting a fitness band or smartwatch won't kill the battery.

The Moto X Play doesn't excel in everything; it's oddly not as waterproof as the cheaper Motorola Moto G (2015), the camera doesn't perform well in low light, and performance is middling.

However, a reasonable price and great battery life give it an edge against other phones in the increasingly crowded mid-range smartphone market. Squeezed between the Moto G and the Moto X Style, the Moto X Play is a more-than-decent mid-range smartphone; if you can't get an invite for the OnePlus 2, it's an excellent alternative. You'll be able to pick a dual-sim model up soon for around $569.