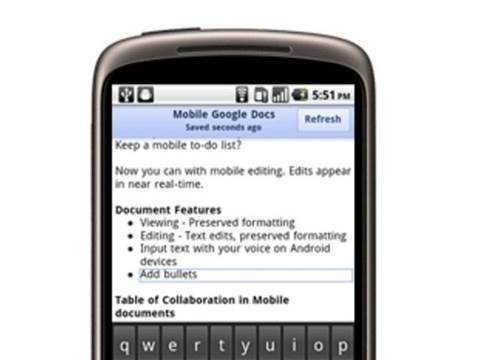 Users can now edit documents from their handsets, as Google Docs claws back Office

"With Google Docs, we’re always trying to make you more productive — and part of that means making it possible for you to get things done from anywhere, at anytime," said software engineer Andrew Grieve on the Google blog.

The mobile editing system not only allows users to read and edit documents on the go, but to also see real-time changes made by collaborators to the document.

At the moment, the system is limited to Android version 2.2, as well as Apple devices running iOS 3.0 and above.

Mobile Google Docs is being rolled out to English-language users globally over the next few days, with support for other languages to follow.

To use the system, head to docs.google.com in a mobile browser, select the document, and press the 'edit' button to switch it to the mobile editor.