Mobile browsing just overtook the desktop for the first time 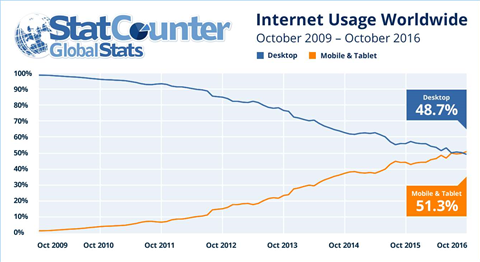 New statistics provide further proof that you need to ensure your website is optimised for mobile devices.

The decline of the desktop PC passed a major milestone in October 2016: web browsing on mobile and tablet devices exceeded desktops for the first time, according to StatCounter.

The web traffic analytics company found that mobile and tablet devices accounted for 51.3% of worldwide internet usage, compared to 48.7% for desktops. And as you can see from the chart above, that trend is likely to continue, even with recent attempts to give it a kickstart.

StatCounter has been tracking global browser data since October 2009. Cast your mind back to then: Keven Rudd was in his first stint as prime minister, Ricky Ponting was Australia’s Test cricket captain, and St Kilda made the AFL grand final. Your mobile was most likely an Apple iPhone 3GS, Blackberry, HTC Hero or possibly even a Nokia feature phone. Is it any wonder, given the somewhat clunky browsing experience those handsets offered, that in those halcyon days you preferred browsing from the desktop?

That's all changed now with smartphones and tablets offering a better web experience, and smartphone data plans no longer being insultingly limited for the money.

StatCounter's CEO Aodhan Cullen believes this should be a wake-up call to businesses that still view mobile optimisation as an afterthought. “Mobile compatibility is increasingly important not just because of growing traffic but because Google favours mobile friendly websites for its mobile search results,” he said.

While the trend is obvious worldwide, interestingly the graph is skewed by mobile adoption outside of the West. While Australia, the UK and US still have the desktop on top, 78% of India's internet access is via mobile, for example. 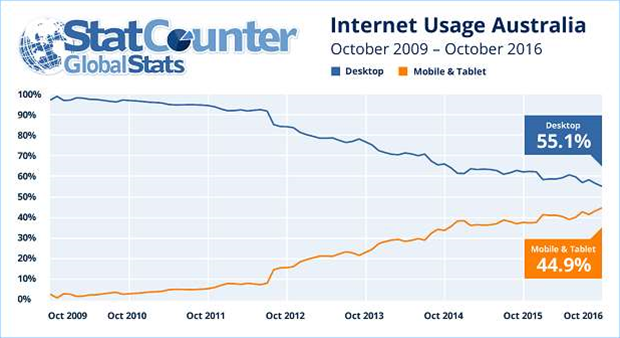 That’s obviously important for businesses that trade with developing countries. But even for those that don’t, 45% of Australian internet traffic is a huge – and fast-growing – chunk of the market.

The good news is that optimising your website for mobile devices should no longer cost the earth, as techniques such as responsive web design are now widely used by web designers and in web design templates.

StatCounter’s Global Stats data is based on over 15 billion page views per month on more than 2.5 million websites.

This article is based on a news story that originally appeared at alphr.com