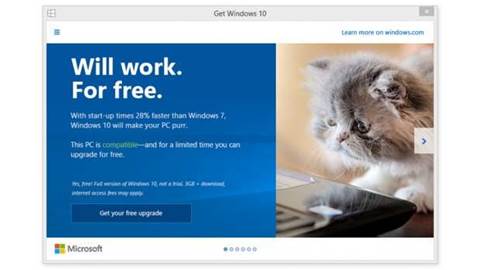 Not upgraded to Windows 10 yet? Microsoft is about to make sure you do

Microsoft is changing the way it handles upgrades to its latest OS, Windows 10.

Previously users had to consciously opt for Microsoft's operating system, but going forward Windows 7 and Windows 8 users will begin to see it listed as an “optional update”. At some point early next year, Microsoft will then change that to a “recommended update” and, depending on your update preferences, automatically download it to your machine.

“Depending upon your Windows Update settings, this may cause the upgrade process to automatically initiate on your device,” Terry Myerson, Microsoft's Windows and Devices executive vice president, wrote on a blog post last night. “Before the upgrade changes the OS of your device, you will be clearly prompted to choose whether or not to continue.”

As always, if you decide you want to go back to how things were, you have 31 days to do so before Windows 10 clears its cache of your previous install to free up space.

While Microsoft pushing Windows 10 down users' throats may not sound all that appealing, it's a sure fire way to ensure more people are running on its unified platform. Not only will this help Microsoft plug security holes far faster, but it also increases the likelihood that people will spend more money within the Windows 10 ecosystem thanks to not having had to shill out for a new copy of Windows or a new computer to use it on.

Interestingly, Microsoft is also going to try a new strategy with those using non-genuine copies of Windows 7 and 8.1. Having learnt a lot from “the creative efforts which non-Genuine customers have gone to”, to upgrade to Windows 10, Microsoft is trailing a new one-click system in the US to encourage purchase of a new licence key for its OS. If the new tact works, it'll roll it out in other territories.

I have read and accept the privacy policy and terms and conditions and by submitting my email address I agree to receive the Business IT newsletter and receive special offers on behalf of Business IT, nextmedia and its valued partners. We will not share your details with third parties.
Copyright © Alphr, Dennis Publishing
Tags:
download going listed microsoft software stargate sg1 upgrade yule
By a Staff Writer
Nov 2 2015
4:16PM