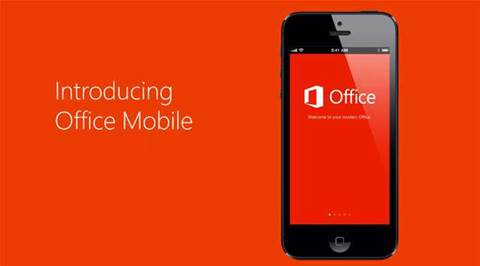 Click here to see what the biggest hurdle to using Microsoft's just-announced Office Mobile app for the iPhone is.

Microsoft Office has finally come to Apple's iGadgets, but at this stage it's probably not everything you hoped for.
Right now "Office Mobile for Office 365 subscribers" is only available in the US iTunes store, though some people may use workarounds to create a iTunes US account and download it.
Newsletter Signup

I have read and accept the privacy policy and terms and conditions and by submitting my email address I agree to receive the Business IT newsletter and receive special offers on behalf of Business IT, nextmedia and its valued partners. We will not share your details with third parties.
Perhaps the biggest hurdle to using Microsoft's Office app is that it requires an Office 365 subscription. You can't even trial the app without one. This is frustrating if you're not ready to make the leap from desktop versions of Office 2013 to an Office 365 subscription.
Thankfully Office 365 offers a free 30 day trial, which gives you time to test out the app. The app will work with Australian Office 365 subscriptions, even though it's not available in the Australian iTunes store.
The other key limitation is that Office Mobile for Office 365 subscribers is only optimised for the iPhone, so if you want to use it on the iPad you need to scale up the iPhone app.
There's been a lot of pressure on Microsoft to launch an official Office app for iOS, but it's not the only way to edit office documents on an iGadget. One option is to upload your Office files into a competing cloud office suite like Google Docs or Apple's iWorks. Another option is to use a third-party iOS Office app which is compatible with Office files, such as CloudOn or QuickOffice.
Alternatively you can simply access Microsoft's SkyDrive and Office Web Apps in Mobile Safari on an iPhone or iPad. You don't need an Office 365 subscription to do this, and you actually get access to more features and formatting options than you do using the new app. For example you can't create PowerPoint presentations using the app.
If you're an Office 365 subscriber it's worth taking a look at Microsoft's new Office Mobile for Office 365 subscribers, but it's features are rather underwhelming compared to the alternatives. It's certainly not worth upgrading to Office 365 just to use this app, at least not yet.
Copyright © BIT (Business IT). All rights reserved.
Tags:
apps australia iphone itunes microsoft office software
By Adam Turner
Jun 17 2013
11:02AM