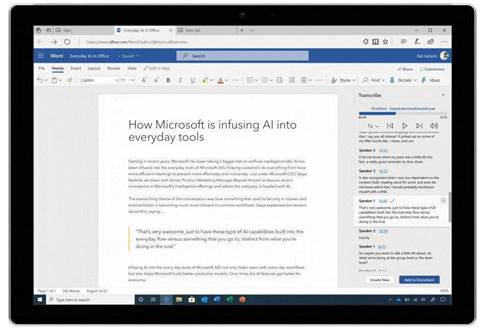 If you’re a secretary, researcher, lawyer, or anyone else that spends hours typing up recordings, this could save you a lot of time.

If you’ve ever had to transcribe a recording, you’ll know it’s a tedious task.

You can pay a transcriber to do it, but you might need to wait anywhere form a few hours to more than a day. And that might get expensive if you need to a lot of transcriptions.

Or, you could use an automatic transcription service, which uses software to figure out what’s being said. These services aren’t always as accurate as a human transcriber (they can be wildly inaccurate in our experience), but they’re typically much cheaper and faster – you can get a transcription in a few minutes for a few dollars. They include Rev and otter.ai.

But from “early next year” you’ll be able to use Word to automatically transcribe audio recordings. Microsoft is planning the feature for Word for web in early 2020, and will make it available for Word for desktop and mobile apps in the Australian autumn.

Microsoft’s transcription feature won’t be free – the company says it will announce “plans and pricing” later.

The feature will work by storing the files in your OneDrive cloud account and using Microsoft cloud-based smarts - called Azure Speech Services – to decipher what’s been said.

Interestingly, you’ll also be able to click a “Dictate” button to record audio straight into Word – handy if you don’t have your phone handy for the job.