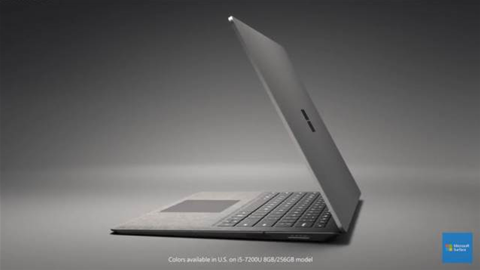 The stunning new Surface Laptop and locked-down version of Windows 10 may be suitable for business, as well as education.

All the rumours had pointed to a Surface device aimed to rival the Chromebook. While we expected budget for the classroom, Microsoft went another way. As Surface boss Panos Panay said when he took to the stage at Microsoft’s education event in New York, the Surface Laptop is a device that’s designed to last from orientation to graduation, and it has the specifications to match.

But while Microsoft was pitching its Surface Laptop to the higher-end, it left the lower Chromebook-rivalling part of the market to third parties, announcing Windows 10 Education PCs starting from US$189.

Chromebooks, of course, are known for their lightweight operating system designed to make the most of the meagre specifications, and Microsoft has similar thoughts for the Surface Laptop and third-party Education PCs. Rather than including a full installation of Windows 10, they come with the Windows 10S, the new locked-down version of the operating system which is designed with security in mind – and those security features could potentially make the Surface Laptop and Education PCs suitable for some businesses too.

But first, more about the Surface Laptop, which is simply stunning. It boasts a 13.5in display with 3:2 aspect ratio and 3.4 million colours. That screen is compatible with the Surface pen, too. Panay claims it’ll give you a whopping 14 and a half hours of battery life.

“Leave your charger at home, and go to school,” he said. “Then go to the library. Then go home and binge watch Netflix. Then cram a little. Then charge it.” 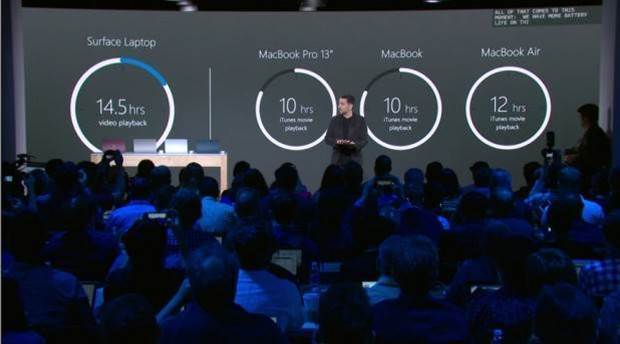 While conceding that the MacBook Air and Pros are “awesome products” and popular in education, Panay claimed the real beauty of the Surface Laptop was its balance. Despite that, he claims it compares pretty well to the best of Apple’s stable. Not only is it thinner and lighter than any Macbook Air or Macbook Pro, it’s supposedly 50% faster than the Macbook Air and faster than the i7 Macbook Pro.

It’ll come in platinum, burgundy, cobalt blue or graphite gold, and it’ll have no speaker grilles: the Dolby audio sound comes through the fabric of the backlit keyboard, which is the same Alcantara you get on the Surface Pro 4. It’s an interesting design that we can’t wait to see in person.

Microsoft says that Windows 10S is “streamlined for security and performance”. The catch: it only run apps from the Windows Store and is restricted to Microsoft Edge as the browser and Bing as the default search. The upside: it includes some advanced security features including the Bitlocker full disk encryption feature and full support for Mobile Device Management, both of which are only otherwise available on Windows 10 Pro.

But if you change your mind and want a full version of the OS, you can upgrade to Windows 10 Pro via the Windows Store.

According to Microsoft: “Windows 10S was inspired by students and teachers… it’s also a great choice for any Windows customer looking for consistent performance and advanced security.” So potentially, it could be suitable for businesses, just as Chromebooks are.

And with the company boasting that Windows 10S PCs from third parties would start at US$189, Microsoft is certainly looking to take on Chromebooks at the low-end of the market, and Apple at the high-end.

The Surface Laptop will be available on 15 June at Microsoft's online store and selected Harvey Norman and JB Hi-Fi stores.

We’ll review the Surface Laptop and other Windows 10S PCs when they become available.