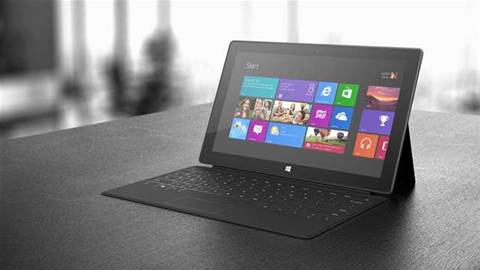 After a week of using the Microsoft Surface as our main work computer, we're surprised at how well it's done. It's not all smooth sailing though.

Having run through an overview of the Microsoft Surface (link: http://www.bit.com.au/News/322156,microsofts-surface-tablet-the-pros-and-cons.aspx) and road-testing the Surface’s battery life (link: http://www.bit.com.au/News/322277,how-long-does-the-microsoft-surface-battery-last.aspx) we thought it would be worth noting the problems we’ve encountered.

Although the device has passed most of our testing comfortably it hasn’t all been smooth sailing. We did hit a few problems along the way.

The Bluescreen of Death is still there, just prettier
While at a conference we tried to find a free WiFi network. We changed networks a few times and our Surface crashed.
In the old when Windows crashed you’d be confronted with a screen filled with goobledegook. Now, you get a sad face emoticon.
Type Cover Misfire?
When you send as much typing as we do, having a reliable keyboard is critical. In our experience, the Type Cover is better than the on-screen keyboard when it comes to speed but it misses some letters.
We are certain it’s not our typing skills as it’s close to impossible for us to miss long strings of letters when typing.
Also, when resuming from sleep, Type Cover was not always recognised. We had to disconnect and reattach it occasionally. It’s not a big deal but it was annoying.
There’s also reported bug with the sound muting automatically because of some issue with the Touch Cover.
We haven’t hit that one as we have the Type Cover but apparently it’s a fault with the cover rather than the tablet.
Calendar Syncing and Subscribing
Many conferences and online groups offer online calendar subscriptions that automatically add events to your diary. Using the Windows RT Calendar app you can’t subscribe to webcal calendars.
The only way around that we could find subscribe using the online version of your Windows Live calendar and then sync to your Surface.
If you use Google Calendar you can only see and sync with the default calendar in Google.
If you use multiple calendars (eg Work and Personal) only the default calendar can be seen. This was an issue with Windows Phone that was resolved so it may be sorted out eventually.
Extra Storage and Libraries
One of the great features of the Surface is that it can be easily expanded with a MicroSD card. We added a 64GB cad to bolster the 32GB that our Surface shipped with.
While saving files to card was easy enough, folders on the card aren’t part of the Library system in Windows RT.
For example, we created a Videos folder on the card and stored our movies on it. However, we couldn’t add that folder to the Movies library as the card is a removable drive.
As a result, when we launched the Video app, our movies weren’t automatically listed and we had to navigate to them manually.
There is a workaround for this (link: http://lifehacker.com/5788839/how-to-add-unsupported-removable-drives-to-windows-7s-libraries) that does work although it would be nice if there was no need for it.
The Learning Curve
One if the biggest criticisms proffered against Windows 8/RT is that it is so different to previous releases.
After a week we were treating this like an adventure as we kept finding new things. However a number of things take getting used to.
Selecting tiles on the home screen requires that you tap, hold and move them slightly. When you do it right, a small tick appears in the top-right corner of the tile and menu appears at the bottom of the screen.
There are lots of touch gestures - swipe from the left for Charms menu, swiping each of the edges brings up different options, if you swipe the left side back and forth, you can see an application switcher, and playing with swiping from the left side and you can snap applications to the side so you can have two apps running side by side.
All in all, we’re surprised at how well the Surface has done.
For the last week, it has been our main work system and we’re heading to another conference this week and not planning to take a laptop. The Surface has the capability to fill the role of travelling computer.
Newsletter Signup

I have read and accept the privacy policy and terms and conditions and by submitting my email address I agree to receive the Business IT newsletter and receive special offers on behalf of Business IT, nextmedia and its valued partners. We will not share your details with third parties.
Copyright © BIT (Business IT). All rights reserved.
Tags:
blue screen hardware microsoft surface tablets
By Anthony Caruana
Nov 12 2012
10:52AM