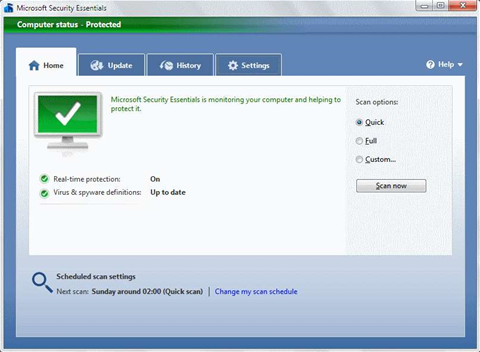 Microsoft have announced that it will offer its Microsoft Security Essentials antivirus package at no charge to small businesses, from next month

Microsoft have announced that it will offer its Microsoft Security Essentials antivirus package at no charge to small businesses, from next month.

The program is already free to home users, but Eric Ligman, Microsoft Global Partner Experience Lead, revealed in a blog post yesterday that Microsoft would also be making it available for no charge to small businesses of up to 10 PCs, beginning in early October.

Microsoft Security Essentials hasn’t always had the best of press since it was first released back in 2009, however it does have some advantages.

“Microsoft Security Essentials is powered by the same core malware protection engine that drives Microsoft’s enterprise solution”, wrote Ligman, pointing out that it “is designed to run quietly in the background, enabling you to continue using your PC – and running your small business – without constant interruptions.”

And when the program was tested by AV Comparatives it received their middle-ranking Advanced award, along with McAfee, Panda, Sophos and AVG, with the testers noting that it displayed very few false alarms.

Perhaps most interesting is the October timing, though, which suggests it may coincide with the full release of Microsoft Security Essentials 2.0, currently in public beta.

Adding “free for small businesses” to the list of features would seem like a smart marketing move, then, and so our assumption would be that Microsoft Security Essentials 2.0 will also be released in “early October”.