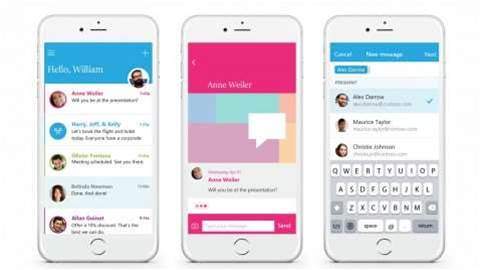 Microsoft Send is MSN Messenger for grownups, and you could be using it at work very soon

Microsoft has launched Microsoft Send, a new messaging service that should have Slack worried. Designed to provide lightning-quick communication between co-workers, Send comes with the added bonus of Outlook integration. The app is already available to iOS users in the US and Canada, and Microsoft says it will be releasing a version for Android and Windows Phone soon.

There's currently no mention of a UK release, but a blog post on the Office site reads: “We expect to make the app more broadly available in the coming months,” so it should just be a matter of time.

Microsoft Send is an app designed to speed up communication by filling the gap between text messages and emails. Much like Slack, Send is classed as an instant-messaging (IM) tool, and is made for schools and businesses using Office 365.

Users can reply to colleagues' messages like a normal IM chat. It could be used to send the following messages:

However, Microsoft has added features to make replying even faster. If you're in a rush, swiping will reveal Quick Replies such as “On my way” and “I'll get back to you”, just like iMessage does. Send lets you message anyone with an email address, but to keep things uncluttered, the app will only display conversations started in the app.

Significantly, all sent messages comply with company email-compliance policies, making it a proper alternative to email. What's more, Microsoft says the app saves a copy of your chat transcripts in Outlook, so you'll be able to search your sent messages for important replies.

Send is the latest app from Microsoft's innovative Microsoft Garage; a branch of the company that allows employees to work on experimental apps in their downtime. The project recently released a Tossup, an innovative planning app, and has released other experimental apps such as InstaNote and Receipt Tracker in the past.

However, unlike its previous Garage apps, Send has huge mainstream potential. The widespread success of Slack shows the demand for enterprise-targeted chat applications, and Send's Office integration means it could slot into the existing infrastructure of many organisations. Would you be interested in using Microsoft Send? Let us know in the comments.

I have read and accept the privacy policy and terms and conditions and by submitting my email address I agree to receive the Business IT newsletter and receive special offers on behalf of Business IT, nextmedia and its valued partners. We will not share your details with third parties.
Copyright © Alphr, Dennis Publishing
Tags:
microsoft
By a Staff Writer
Jul 27 2015
2:51PM