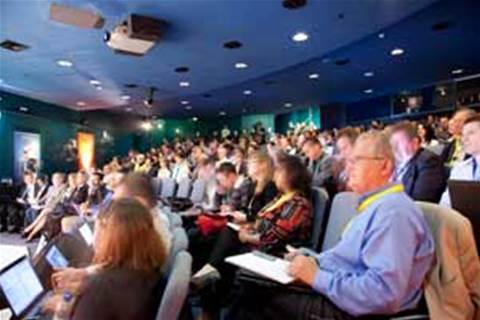 If there was any sign that Microsoft is thinking differently about selling itself to the public, this morning's media launch for Windows 7 was it.

In a lighthearted presentation, Microsoft executives made surprisingly self-deprecating references regarding Vista, and their ability to listen to customers. This was in stark contrast to the 2007 launch of Windows Vista, which was characterised by an in-your-face performance by music group Rogue Traders.

By comparison, today's approach was much more down to earth - even Microsoft's new video marketing for Windows 7 takes a lighthearted approach. "This is the first time people are laughing in all the right places about Microsoft ads," joked Jeff Putt, Windows Consumer Lead Manager for Microsoft Australia.

Microsoft executives defended the absence of a Family Pack at launch, which would make it cheaper for those people with two or more computers at home needing multiple copies of the operating system. At today's launch executives said they are "testing" the family pack overseas, and did not rule out the possibility of it being offered in Australia at some point in the future.

Officials also defended differences between Australian prices (which start at $199 for the Home Premium upgrade, or $299 for the full version), and overseas prices, pointing to factors like freight costs, taxes, and retail margins (which a Microsoft spokesperson claimed are tighter in the US than Australia).

"Retailers operate on much tighter margins in the US than Australia. That is a fact....We are a large country, and we freight products from overseas, that is a fact," said Microsoft's David McLean.

Microsoft officials also said there are "no plans" to discontinue Windows Vista at this time. Even a cheeky question about when Service Pack 1 for Windows 7 will arrive was deflected, with Microsoft officials jokingly telling the audience that the answer is October 22.

Windows 7 features in a nutshell

So which features did Microsoft focus on to sell Windows 7 on launch day? Selling points included:

A number of product vendors were on hand to show Windows 7 hardware, including the following products:

Dell's Studio One was a sleek all-in-one PC utilising touch as the main way to navigate the screen, with aluminum and glass used in the design.

HP were keen to push their new generation of touchscreen PCs - which are specifically designed with Windows 7 in mind, including the HP Touchsmart 600, which is a 23in screen, 16:9, 1080p home multimedia PC for touch enthusiasts.

The 30 best features of Windows 7