Microsoft Lumia 950 review: Interesting, but is it good enough? 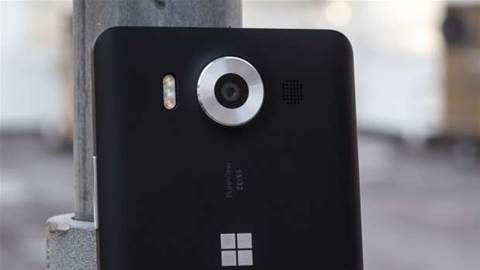 Microsoft's Lumia 950 showcases Windows 10 for phone, and brings with it a rather respectable set of specs

The Microsoft Lumia 950 is Microsoft's first Windows 10 smartphone. That alone makes it a big deal. And if you're a fan of Windows phones, skip the next two paragraphs, because I'm about to say something you'll probably get angry about.

Let's get this out of the way at the very start - this isn't a phone anyone but dedicated Windows fans are going to buy, today, tomorrow or next week. For most people, Windows 10 for phones is simply isn't currently a practical alternative to the Android handsets or iPhones.

In a couple of years, though, who knows? Based on what I've seen so far of Microsoft's new smartphone, I'd say the future, if not completely rosy, at the very least looks interesting.

The reason for this, of course is the new Windows 10 OS for smartphones, which we're seeing - on a new device - for the very first time here. What's the difference between this and the old Windows Phone 8.1?

Visually, not an awful lot. The two share a familiar navigational structure. The vertically scrolling and customisable grid of Live Tiles remains in place, as does the Store, the Action Center pull-down menu and the alphabetical list of all apps off to the right of the main homescreen.

At the very bottom of the screen you'll find the familiar trio of navigation soft keys: back, home and search. Holding down the back button pops up the multitasking view, where you can manage, launch and terminate your recently used apps.

The differences are subtle, yet multifarious and mainly exist behind the scenes. The homescreen is more customisable than before, and looks far more modern - you can, for instance, now add a background image, where Windows 8.1 only allows background images behind the tiles. 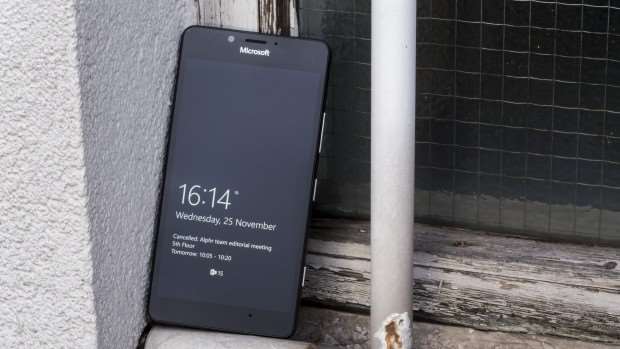 The Action Center shortcut keys, which run across the top of the screen when you bring it up, can be expanded at a tap, adding a further two rows of toggles. Notifications themselves can now be acted upon directly: in fact, if you're using Windows 10 on a laptop right now, this looks identical to the Notifications Center found in the bottom right corner of the desktop.

That gives you a clue as to the central thrust of Windows 10 for phone. Microsoft's stated aim is to create a consistent look and feel across all devices - phones, laptops, desktops and tablets - and to a certain degree, they've succeeded. Launch the settings menu on the Lumia 950 and you'll experience a feeling of déja vu - the styling, icons, even the headings are the same. 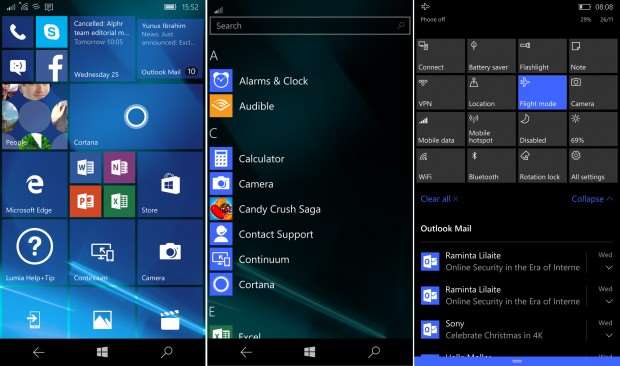 The key to this is Microsoft's Universal apps architecture, which underpins everything. Thus it isn't just the look that the Settings menu and Action Center share, but also the underlying code. And the same goes for the core preloaded apps: The Store app, Mail, Calendar, Photos and the mobile versions of Office are all Universal apps and work the same across all device types.

In a practical sense, that makes a lot of sense. In the future, developers will only have one app to develop, and will only need to expend all that effort once. They'll have only one code set to maintain, saving on ongoing costs, and that might well convince some companies that it's worth investing a bit more in the Windows platform at last. 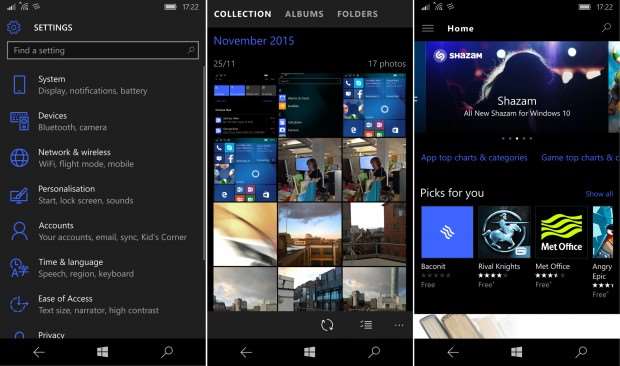 As yet, though, there's not much evidence of the concept taking off. Hats off to Microsoft for getting its own apps off the ground, but of third party development work there isn't much evidence so far. At the demo I was shown Audible, BBC Store, Guardian and Economist, and promised that Netflix and Instagram were on the way, but beyond this, the pickings are slim.

The Universal app concept clearly works, though. Initial impressions are that the Photos app is effective, as are the Mail and Calendar apps, and the Microsoft Edge browser works as advertised as well. However, the Office apps do feel a bit kludgy on the phone, in particular the Ribbon menu that's been relocated to an expanding section at the bottom of the screen.

The other unique feature of Windows 10 (for phone) is Continuum. Plug a video adapter into the Lumia 950's USB Type-C port and you'll be able to hook your phone up to any monitor or TV and use it like a desktop PC. All you need to add is a Bluetooth keyboard. A mouse isn't strictly required, since the screen of your the phone transforms into a multitouch trackpad - and a rather effective one at that.

Alas, I've not been able to test out Microsoft's Display Dock yet, which is equipped with three USB ports, and HDMI and DisplayPort video outputs. Ironically, though, I was able to get it to work with an Apple Type-C to VGA adapter, albeit at a rather coarse resolution. You need an HDMI or DisplayPort adapter to run at 1080p. 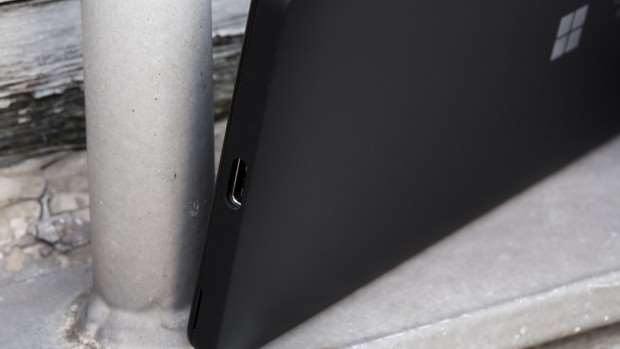 So what can you do with your phone in Continuum mode? Weirdly, not an awful lot - in fact, less than you can in normal phone mode. You can't run full Windows desktop apps, understandably, just Universal apps, and there currently aren't many of those around aside from the core Microsoft apps. You can't even run apps designed for Windows Phone 8.1 in Continuum either, although they will run on the screen of the phone while your pseudo desktop runs on your monitor or TV.

However, it does work reasonably responsively, and if you do find yourself in the situation where you need to get some serious typing done, and have no laptop to hand, the ability to hook-up to a bigger screen and connect a proper keyboard and mouse could come in handy. Are you going to start carrying around just your phone instead of a laptop? No. But Microsoft is at least trying to give you the option in certain circumstances.

Beyond the software, it's a bit of a mixed bag. Inside the Lumia 950 you'll find a Qualcomm Snapdragon 808 chip - the same hexa-core unit used in the recent Google Nexus 5X and the LG G4 launched earlier this year.

There's 3GB of RAM to back that up, 32GB of storage and a microSD slot for expanding on that storage. You can add up to 200GB extra if you want to, and the battery is replaceable as well. Not since the LG G4 appeared earlier this year have I had the full combination of smartphone practicalities in place in a flagship smartphone, so well done to Microsoft on that front. 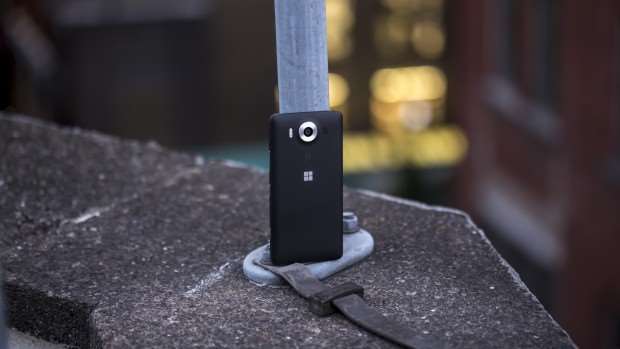 Well done, also, in squeezing a sharp, quad HD AMOLED display into the Lumia 950's 5.2in expanse of display, and what looks like a top-spec 20-megapixel camera, which comes with Carl Zeiss optics, optical image stabilisation, a triple-LED flash and 4K video recording.

However, although the specifications are top-end, the look and feel is far from it. Indeed, I'd go so far to call it ugly. It's plain, featureless, and the rear is made from thin plastic that sounds worryingly hollow when you tap it. The matte finish is totally uninspiring, and the metallic trim surrounding the camera lens only catches the eye because the rest of it is so dull. If you like your smartphones glamorous and glitzy, this is not the smartphone for you.

Still I liked the Nexus 5X despite its design flaws, and the Lumia 950 hits a similar set of design notes.

I have read and accept the privacy policy and terms and conditions and by submitting my email address I agree to receive the Business IT newsletter and receive special offers on behalf of Business IT, nextmedia and its valued partners. We will not share your details with third parties.
Copyright © Alphr, Dennis Publishing
Tags:
action center adapter app benchmark center continuum desktop hardware laptop lumia microsoft microsoft lumia smartphone yule
By a Staff Writer
Nov 30 2015
5:00PM