Microsoft has a new Surface tablet with built-in 4G 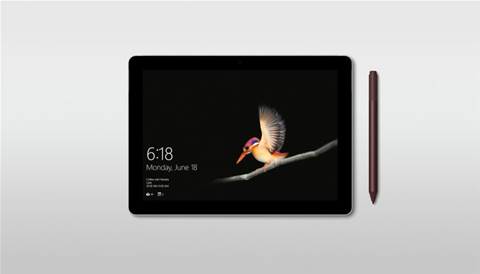 The new version of the Surface Go tablet computer isn’t the first Surface device with built-in 4G, but it is super-portable.

If you’re sick of fiddling with a mobile broadband dongle or your phone’s hotspot function to get your tablet computer online, Microsoft’s newest Surface Go model will appeal.

The new device has a SIM card slot you can use to access 4G mobile broadband networks - if you buy service from a carrier.

Microsoft has pitched the device at field workers who need Internet access on the move.

Microsoft’s sales pitch also says that by using their own 4G account, field workers can avoid unknown Wi-Fi networks that could expose them to security risks. IT managers are another group Microsoft thinks will appreciate a 4G-enabled tablet, as they'll be able to deploy important updates to such devices.

You’ll pay a premium for a Surface Go with a SIM slot. At time of writing, the feature was only available in the model with an Intel 4415Y CPU, 128GB SSD and 8GB RAM. That model was advertised on the Microsoft web site for $999, which doesn’t include a Type Cover keyboard and Surface Pen. The entry-level Surface Go costs $498.

The Surface Go vs Surface Pro

If you’re not familiar with the Surface Go, it’s worth keeping in mind its strengths and weaknesses.

It’s cheaper than its bigger brother, the Surface Pro 6, which cost $1,498 for the lowest-priced model on Microsoft’s Australian web store at the time of writing.

But if you want to show off photos or other imagery to your clients, the Surface Pro 6 might be a better choice. As well as having a larger screen, the screen has a resolution of 2736 x 1824. The Surface Go is just 1800 x 1200.

Another consideration is storage, as the Surface Pro 6 can host one terabyte of data, eight times the 128GB inside the Surface Go.

The Surface Pro is also a better choice if you’ll be using it to run demanding applications, because it has a faster Intel Core i5 or i7 CPU.