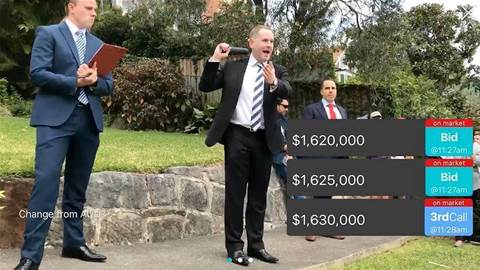 Gavl is an app that allows real estate agencies to stream live video of auctions in close to real time.

“We can’t afford to have any delay on the broadcast of our auctions. They move fast, and even a five second delay can be way too late for a bid to be relevant,” said Gavl CEO Joel Smith.

“Other prominent live streaming platforms can have a delay in excess of 10 seconds but with Gavl our latency is about a second – as live as you can get!”

In fact, Gavl guarantees no more than 1.5 second latency. The need for speed is driven by the company's plans to add live bidding to the system.

But for now, “all it takes is a tripod and a smartphone to film the auction and then potential buyers can view live via the app,” said Smith.

In the first month of operation, more than 100 real estate agencies in Australia and New Zealand have used Gavl. The app has been downloaded in 12 countries, and there have been almost 500,000 auction video views, including more than 22,000 of an auction in Mount Martha on Victoria's Mornington Peninsula.

Users can search for auctions on the site using a variety of criteria, including price and suburb. The bidding pattern is presented on-screen during live streams, and Gavl will soon start including them with archived videos.

Other plans for future development include the digital exchange of contracts, a currency converter and bidding history analytics.

The company is backed by Geoff Harris, who co-founded Flight Centre and was a seed investor in Boost Juice.