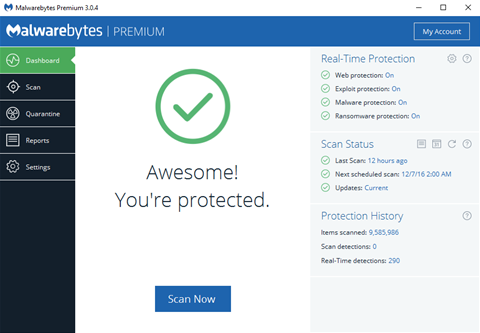 “With the launch of Malwarebytes 3.0, we are confident that you can finally replace your traditional antivirus, thanks to our innovative and layered approach to preventing malware infections using a healthy combination of proactive and signature-less technologies,” wrote Marcin Kleczynski, CEO and co-founder of Malwarebytes, in a blog post.

“While signatures are still effective against threats like potentially unwanted programs, a large portion of our malware detection events already come from our signature-less technologies like our Anti-Exploit and Anti-Ransomware; that trend will only continue to grow.”

It’s a bold claim, but for those who remain a little sceptical and want to continue using traditional protection too, Kleczynski adds: “We built Malwarebytes 3.0 to be compatible with all major antivirus software, even Windows Defender and Microsoft Security Essentials.”

The new suite’s modules are all accessible from a shiny new interface, which has been simplified to give you complete control over the new functionality. If you don’t need Malwarebytes’ anti-ransomware technology, for instance, you can turn it off in a couple of clicks.

Usability tweaks include integration with the Windows Action Center, automatic update checks (no scheduling required) and fewer reboots after some malware removals. The company says it has made major performance improvements, with scan speeds up to time times faster than the previous editions.

Malwarebytes 3.0 currently costs $60 for an annual subscription, which the company says is significantly less than the previous combination of its Anti-Malware and Anti-Exploit tools – with Anti-Ransomware and other tools thrown in as well.

However, existing customers won’t have to pay anything extra for the new release. Just install Malwarebytes 3.0 over Malwarebytes Anti-Malware and it’ll automatically adopt your current licence.

A trial version allows you to use the full suite for 14 days, after which it drops back to being solely an on-demand, anti-malware tool. Malwarebytes is compatible with Windows XP and later.