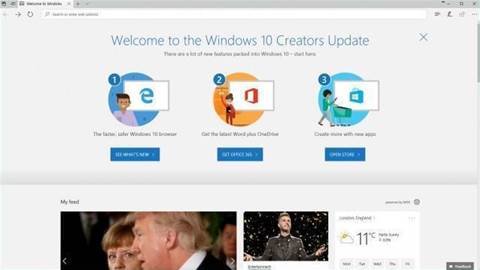 We take a close look at the new and improved features in the latest major Windows update.

UPDATED: It’s only six months since Microsoft released its Creators Update for Windows 10, but already the follow-up is here. From today, the Fall Creators Update will start rolling out via Windows Update, bringing new features and interface enhancements to all users of Windows 10.

That doesn’t necessarily mean that everyone will get it right away, however. The update is being distributed in phases: some users had to wait weeks for the previous Creators Update to reach them, and the same seems likely to apply here. If you want to get it right now, you can download a manual updater from Microsoft’s Windows 10 Download page.

The good news is the changes are all for the better. That’s just as well, since this isn’t an optional download.

Despite the name, the Fall Creators Update has very little to do with creativity. The main enhancement in that direction is an updated version of the Photos app, which now includes a whole new video-editing module. 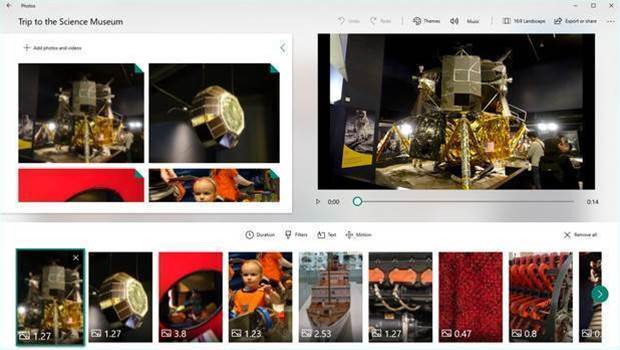 This, to be fair, is quite fun to play with: you can create animated slideshows of your images and video footage in seconds, drawing on a selection of preset visual themes, audio beds and transition effects. There’s also a one-click “Video remix” function which makes all the decisions for you. Simply select your images and hit the button, and it combines them into a striking video presentation. 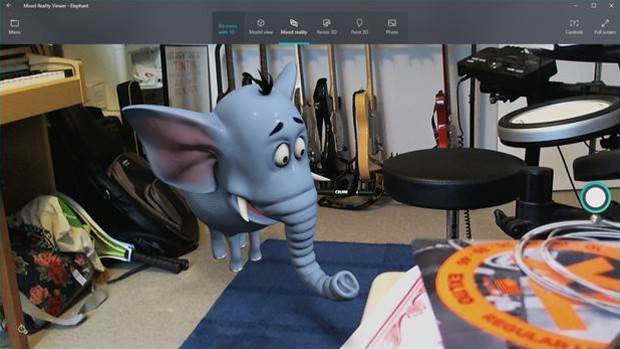 Aside from that, the Fall Creators Update also includes the Mixed Reality Viewer app, which lets you superimpose 3D models onto scenes captured by your device’s camera. It’s a cute technology demo - the app automatically identifies the floor, and generates virtual shadows to make your model look like part of the scene - but again it’s hardly what you’d call creative.

Not many people use Edge as their first-choice browser, but Microsoft is gradually developing it into a contender. Mobile editions for Android and iOS were released a few weeks ago, allowing you to sync bookmarks and other settings across desktop and mobile devices.

On top of that, the new version included with the Fall Creators Update brings improved PDF handling, so you can now fill out PDF forms in the browser, and even write into them with a stylus. There are improvements to EPUB handling too, plus a “read aloud” feature which could be useful if you’re partially sighted, or just trying to do two things at once. Sadly, the implementation is far from perfect: the synthesised voice is exhaustingly monotonous, and tends to put pauses and emphases in unnatural places.

The Fall Creators Update brings numerous tweaks to the general behaviour and appearance of Windows 10. Notably, the Action Centre gets a new look – it’s one of the first elements to showcase Microsoft’s new “Fluent” design system. 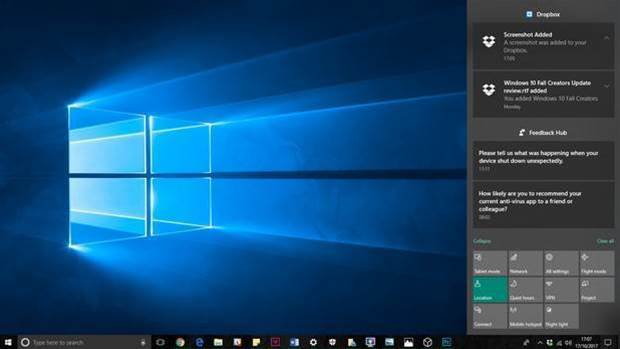 This isn’t a huge break from what we have now, but it means that apps and controls start to look more shiny and translucent (a bit more like they did in Windows 7), and make more use of animation. If you’re interested, Microsoft has released a video showcasing the new Fluent elements:

The Start menu has also been given a Fluent touch-up, with shiny highlights following your mouse cursor around. And it’s now possible to adjust the size of the Start menu diagonally, by clicking and dragging from the top-right corner.

Elsewhere, an inconspicuous My People icon has appeared to the left of the notification area. From here you can quickly send emails in Windows Mail, exchange instant messages or set up voice and video calls in Skype. Up to three contacts can be pinned next to it too, for even quicker communications. It’s not a bad feature, but by now most people will surely already have found a communications workflow that works for them – quite possibly involving Slack, or some other third-party technology that doesn’t neatly integrate with Microsoft’s People app.

Still, whichever communications platform you use, the Fall Creators Update makes it easier than ever to send daft messages to your colleagues with a new system-wide floating emoji palette – simply press the Windows key and full-stop together to open it.

The updated Settings app looks much the same as it did before, but browse around and you’ll find some more new features. The Storage settings now include the option to automatically purge untouched files from your Downloads folder after 30 days. There’s a toggle to enable native HDR support too, if you monitor supports it, and a new Cortana section that brings together all the various settings relating to Microsoft’s digital virtual assistant. 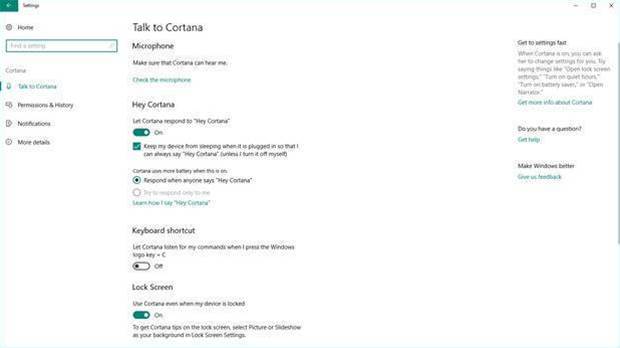 One particularly promising new feature is power throttling: if you’re running on battery power, and your profile is set to Balanced or Battery Saver, Windows will now slow down apps running in the background to prolong battery life. The company claims it’s achieved longevity improvements of up to 11% using this feature. If there’s an app that you always want to run at full speed, you can configure it in the Battery section of Windows 10’s Power & sleep settings.

Another significant new feature - hidden away in the Windows Defender Security Centre - is Controlled folder access. With this turned on, Windows 10 will throw up an alert if any untrusted process tries to change files in your personal folders, and block the operation. This ought to completely defeat the sort of ransomware attacks that have caused so much chaos recently. Unfortunately it's not really mature enough to recommend for general use: by default it blocks absolutely every third-party application, and adding exceptions is a tedious manual process.

Finally, there’s a new “Link your phone” feature, which makes it easy to install the Cortana app for iOS and Android, and share URLs between your desktop and mobile devices. Android users can get other notifications, such as missed call alerts, on the desktop too.

If you’re running out of storage, the best part of the Fall Creators Update might be OneDrive’s new “Files on Demand” feature. When this is activated, new files arriving in your OneDrive won’t be automatically downloaded to your PC. They will however appear in Explorer, with a little cloud icon next to them. When you double-click on one of these files, or access it in some other way, it will be automatically fetched from the internet and opened. 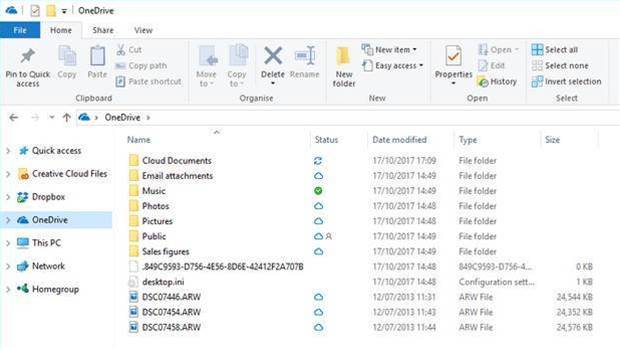 Once a file has been downloaded, it remains on your hard disk and subsequent changes are synchronised just like a normal OneDrive file. If you need to reclaim the disk space, you can simply right-click and send it back up into the cloud.

It’s undeniably a more convenient answer to limited storage than Dropbox or Google Drive. It’s just a shame that it didn’t come along a few years ago, when tiny SSDs were still fairly commonplace; nowadays, a few gigabytes here or there don’t make a huge difference to most people.

What’s not in the update

Disappointingly, the new Timeline feature – originally advertised as a key benefit of the Fall Creator’s Update – wasn’t ready in time for release. That’s a shame, as it’s a neat idea: it gives you a chronological view of the recent applications and documents you’ve been working on, and lets you jump back into any of them with a single click. Judging by Microsoft's promo video, it looks a lot more convenient than opening apps and documents by hand; alas, we’ll probably now have to wait for the next major Windows 10 update for a general release. 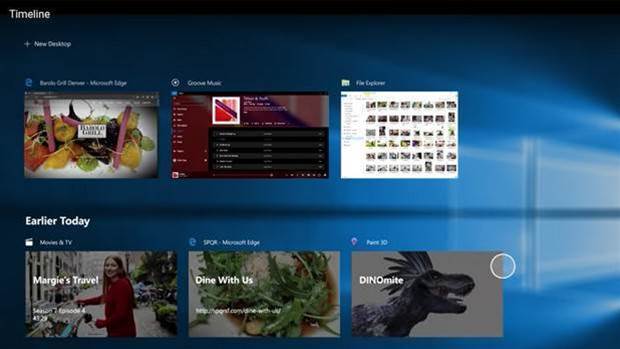 Note too that if you’re still using the old Outlook Express email app, this gets removed in the Fall Creators Update, having now been completely replaced by the Mail app. And while Microsoft Paint is still there, it’s now officially deprecated, which means it won’t get any new features and is liable to be removed in a future update.

The future for mobile platforms

Alongside the main release, there’s also a new Fall Creators Update to Windows 10 Mobile – the platform’s little brother that runs on ARM-based smartphones and tablets. This is a much more minor release than the desktop edition though, with far more bugfixes than new features: the main updates are a new two-factor authentication system, improvements to the VPN system and support for all the hottest new emoji symbols.

To be honest, at this stage it barely matters. A few days before the Fall Creators Update officially started to roll out, Microsoft’s Joe Belfiore confirmed that developing Windows 10 Mobile was no longer a “focus” for the company. That makes sense, since almost nobody is making or buying Windows smartphones any more. Even so, it’s a shame, the idea that the same Store apps would run on your desktop and your phone was a key part of the original Windows 10 vision.

Still, the dream might not be dead. Microsoft has recently been developing new builds of Windows 10 running on ARM hardware – which include a Win32 emulation layer, allowing them to run not only Store apps but older x86 applications too. We might soon see a new generation of lightweight laptops and tablets – and yes, even smartphones – that finally deliver the long-promised cross-device experience.

At first glance, the Fall Creators Update looks like a bit of a let-down. There’s nothing very creative about it, the useful-sounding Timeline feature is missing, and many of the visible changes – new interfaces and switched-around settings – feel more like cosmetic tweaks than solid improvements.

Yet there are some very positive features here to discover. Controlled folder access is potentially a very valuable addition, and app throttling could prove a real boon to overworked travellers needing to eke out every last drop of battery power. OneDrive on Demand, meanwhile, is the neatest answer we’ve seen to the problem of cloud syncing on a device that’s short of storage.

All that’s just as well, of course, because as usual this isn’t an optional update: sooner or later, Windows 10 users are going to get the Fall Creators Update whether they want it or not. That being the case, we might perhaps be thankful that Microsoft has held back from big, transformative changes. What it’s given us instead might not be terribly ambitious, but it’s another definite step forward for Windows 10.

The article originally appeared at alphr.com.