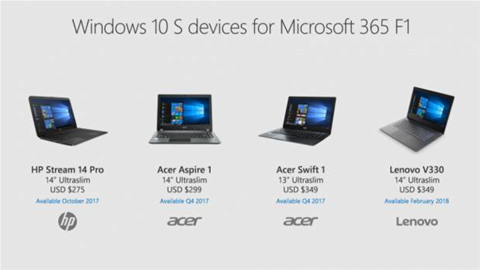 New HP, Acer and Lenovo devices are designed to maximise security and minimise the cost of ownership.

Microsoft was first to release a Windows 10 S device with its Surface Laptop. Now HP, Acer and Lenovo are targeting businesses with imminent releases of low-cost laptops running the new version of the operating system, according to Microsoft.

Windows 10 S is “streamlined for security and performance”, Microsoft says. The catch: it only runs apps from the Windows Store and is restricted to Microsoft Edge as the browser.

HP’s Stream 14 will be the first to arrive (in the US) in October, while the Acer duo will launch before Christmas, and the Lenovo V330 in February next year. We’ll report on Australian availability and prices of the devices as those details come to hand.

Microsoft says the three PC makers are targeting “frontline” workers with the new laptops. The aim is to minimise the cost of ownership, while securing devices against hackers and other malicious activity. To achieve this, Windows 10 S’s Microsoft Edge browser offers security against phishing attacks and malicious software, while Windows 10 S blocks non-Windows Store apps from running, ensuring users are protected even when using an external network, according to Microsoft.

Blocking non-Windows Store apps has proved a sticking point with some critics of 10 S, though users will get the option to upgrade to Windows 10 Enterprise running “in S mode”, Microsoft says, giving them Credential Guard, Application Guard and centralised management of the Windows Store. There’s no price tag on that upgrade option yet.

Microsoft has also promised (previously) that Windows 10 S devices will be easily upgradable to Windows 10 Pro, although the low prices of the HP, Acer and Lenovo laptops suggest they’re unlikely to be free upgrades as it currently is for Surface Laptop buyers.

“As we strive to empower every person and every organization on the planet to achieve more, we see a significant opportunity to bring technology to all workers, especially those on the front line,” Bernardo Caldas, general manager of commercial marketing for Windows, said in a blog post.

“These two billion Firstline Workers are the people who serve as the first point of contact between an organisation and its customers or products. A critical part of empowering this workforce is providing custom technology experiences and streamlined, secure devices that help them get their work done and build skills.”