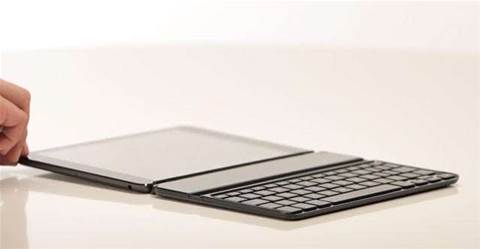 We've been very impressed with the Logitech Ultrathin Keyboard Cover and now the good news is there's a version for the iPad mini.

I have read and accept the privacy policy and terms and conditions and by submitting my email address I agree to receive the Business IT newsletter and receive special offers on behalf of Business IT, nextmedia and its valued partners. We will not share your details with third parties.
It's basically the same as the regular model, only smaller. The keyboard attaches magnetically to the iPad mini, adding just over 200g to the total weight, and like its larger sibling connects via Bluetooth and also does the automatic wake/sleep thing when you open or close the cover.
Battery life is said to be three months (based on two hours per day) compared with six months for the regular iPad version, so it sounds like battery size and hence capacity was one of the things sacrificed when scaling down the design to suit Apple's baby tablet.
Perhaps more importantly, the keys are still "full-size" according to Logitech officials (though we haven't had the chance to measure them), with shortcuts for operations such as copy and paste.
RRP is $89.95, and stockists include Apple stores, Big W, Dick Smith, Harvey Norman, JB Hi-Fi, Myer, Officeworks, and The Good Guys.
Copyright © BIT (Business IT). All rights reserved.
Tags:
hardware ipad keyboard logitech mini ultrathin
By Daniel James
May 27 2013
1:12PM