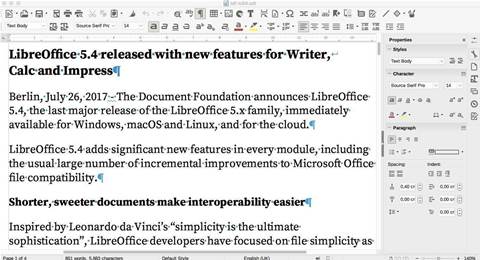 And that's just one of the enhancements in the latest version of the free office suite.

The Document Foundation has unveiled LibreOffice 5.4, which the organisation says is “the last major release of the LibreOffice 5.x family”. It’s a major upgrade for the open source office suite, adding features across all components and incrementally improving compatibility with Microsoft Office document formats.

LibreOffice strengthens compatibility with Microsoft Office formats among other new features and improvements.

The full structure of bulleted and numbered lists is now preserved when pasted as plain text, and users gain the ability to create custom watermarks for their documents via the Format menu.

Calc gains support for pivot charts using data from pivot tables, which are dynamically updated as the table data is amended.

Menu commands have been added to make comments easier to manage through ‘show’, ‘hide’ and ‘delete all comments’ options. Calc also adds up and down buttons to make it easier to change the priority of conditional formatting rules.

Extra sheet protection options are in place for optionally allowing the inserting and deletion of rows and columns, and user settings for CSV export are retained for the next export operation.

LibreOffice Impress sees improvements to its object duplication tool, with settings saved for the next operation and an option to specify fractional angles added.

As always, these changes scratch the surface of what’s been implemented in LibreOffice 5.4 – check out the extensive release notes for a full rundown.

LibreOffice 5.4 is available as a free download for Windows, Mac and Linux (64-bit, or 32-bit for Windows and Linux machines).

This article originally appeared at www.softwarecrew.co.uk.