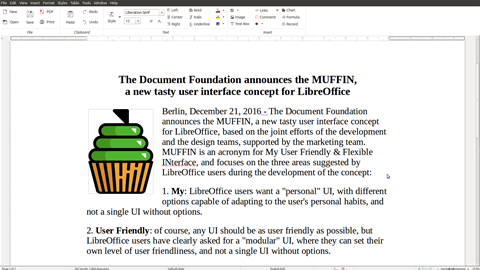 The latest version is billed as “one of the most feature-rich releases in the history” of the popular Office alternative.

The Document Foundation’s LibreOffice started life as an offshoot of the OpenOffice open source project, but it has since become the go-to alternative to Microsoft Office. Now the organisation has unveiled the latest version, LibreOffice 5.3 – and despite the point update, it's packed full of major changes affecting all parts of the suite.

In fact, foundation has billed the new version as “one of the most feature-rich releases in the history of the office suite”.

Highlights include a new experimental (and optional) ribbon-based interface, plus a new cross-platform text layout engine. It’s also accompanied by the first source release of LibreOffice Online, which allows businesses to run the suite in their own private cloud infrastructure for basic collaborative document editing in a browser.

A new text layout engine opens the list of notable new suite-wide features. This is a cross-platform engine that supports OpenType and Graphite Layout on all platforms, providing a consistent text layout on whatever machine LibreOffice is run on.

The new engine is more flexible, supporting a wider range of scripts and languages, including vertical ‘left-to-right’ block direction.

LibreOffice 5.3 also implements a new colour palette system with changes to the workflow (including improvements to how recent colours are handled), a reduced set of palettes and support for introducing new colour palettes via extensions.

Other core improvements include a new Safe mode, allowing LibreOffice to be launched with a clean user profile should problems be encountered with an add-on or corrupt setting. You can trigger it via Help > Restart in Safe Mode… or by using the –safe-mode command line switch (Windows users also gain a Start menu shortcut). 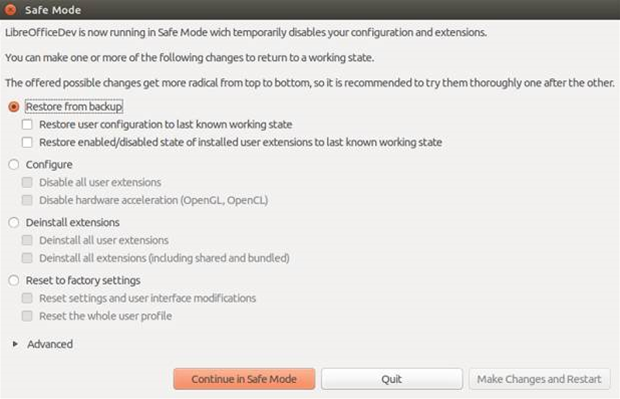 Users also gain the ability to embed PDF into documents as images, while the drawing tools for arrows have been extended from both Draw and Impress to Writer and Calc.

Keyboard shortcuts now appear in context menus (toggle this on and off via Tools > Options > View > Menu), and the document recovery dialog has been simplified.

Writer users can now quickly move between pages via [Ctrl] + [G] or Edit > Go to Page. Table styles have also been implemented.

Borderless padding is now displayed and the Navigator has been improved to allow multiple heading selection for promoting or demoting their levels – toggle ‘Content Navigation View’ and use [Shift] or [Ctrl] to do so.

Wildcards in formulas are now enabled by default in Calc, and Median has been added to the list of functions in Pivot tables. Users can now also merge non-empty cells via Format > Merge Cells > Merge Cells.

Impress users gain a new Template Selector (and two new templates: Vivid and Pencil), while the underlying Firebird SQL database connector for Base has been upgraded to version 3.0 – be warned, this version is not backwards compatible (compatibility is promised for a future version of Firebird) so some databases may stop working in LibreOffice 5.3. A workaround is provided on the release notes page.

At the present time, the feature – codenamed MUFFIN – is still relatively sparse, although users have a choice of three basic styles: tabbed offers the closest approximation to Microsoft Office, with contextual groups and contextual single options also available.

These changes scratch the surface of what’s been implemented in LibreOffice 5.3 – check out the extensive release notes for a full rundown.

LibreOffice Productivity Suite 5.3 is available now as a free, open-source download for Windows, Mac and Linux. There’s a 64-bit version for modern computers and a 32-bit version for older 32-bit Windows and Linux machines.