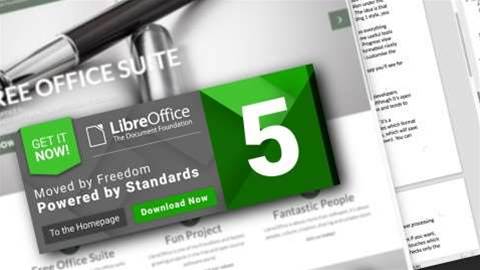 It's free! It's open! But does LibreOffice deliver on its promise of a powerful office suite for normal users?

How much should you pay for a full suite of office applications? The nightmare scenario for Microsoft is that the answer to this is “nothing”, and LibreOffice is one of the products making that nightmare more of a reality.

LibreOffice is a free, open-source office suite that includes a word processor, a spreadsheet and presentation software. It's derived from the old OpenOffice code base but is much improved over it and its successor products. And, as you'd expect from an open-source product, it's available on a range of platforms: Windows, Linux, OS X, and (of course) anything you can get the source code to compile on yourself.

That doesn't include either Android or iOS, although an Android viewer lets you see documents, and a full version is “coming soon”. This is the first problem with LibreOffice: now that a lot of work happens on tablets and smartphones, the lack of a full version on those platforms seems backwards. When Microsoft is creating free versions of Office for both Android and iOS, having an office suite that isn't available on mobile devices is a major hindrance. 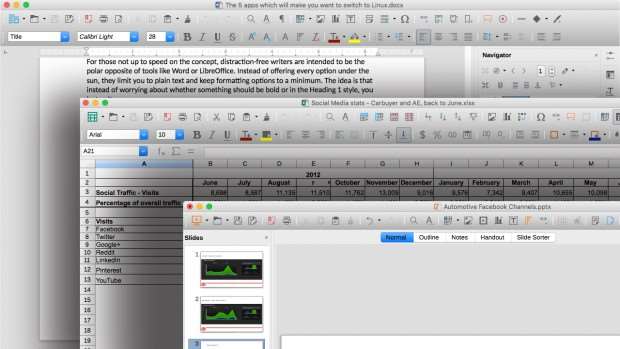 The overall look and feel of LibreOffice is also dated. Although it has been improved over older versions of OpenOffice, which really did look like something designed in 1998, it still doesn't match the attention to detail and design work that's gone into Microsoft's suite. It's best described as functional rather than pretty. If you don't care about this, of course, it won't be an issue to you – but for many people, using something that looks and feels dated does matter. On OS X, even the icon - a dull grey document with one corner turned over - looks uninviting.

It is, to its credit, a clean-looking interface, and one that will be familiar to anyone who used Microsoft Office ten years ago. Whether you prefer a modern look or something traditional will determine whether you like the interface design of LibreOffice.

LibreOffice eschews Microsoft's ribbon bar with multiple tabs hiding every single feature in favour of the older interface model of multiple toolbars that you can optionally show or hide. Yes, this means you could potentially have 25 toolbars open and virtually none of them visible, but at least you can customise which tools are visible to you without having to flip between tabs on a ribbon.

That's ideal for people who have a specialised role in document creation and really want a subset of tools that are always available. If you're an editor, for example, having the review tools on screen is important.

One core feature that isn't there is live document collaboration of the kind that's built into both Google Docs and the online version of Microsoft Office (and is coming gradually in Office 16 for Windows). You can't have several people working on a document at the same time, so instead you have to shuffle files around using email or simple shared drives (such as Dropbox). How important this is to you will depend on the kind of work you do, but for an office suite in the second decade of the 21st century it feels like an omission. 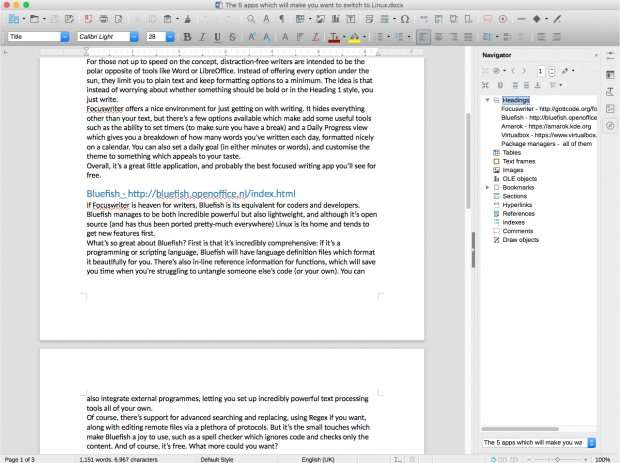 There are two major trends in tools for writing: simplified applications that provide minimum distraction and let you focus on the words; and complex beasts that have tools for pretty much any kind of document creation. LibreOffice Writer definitely falls into the latter category.

If you've used Microsoft Word in the past 20 years, there's nothing here that will surprise you. It's incredibly comprehensive, with tools for optimising layout, creating indexes, footnotes and so on, and a lot more. If you have any specialised needs for document creation, whether as a business or academic user, Writer has you covered. Thanks to features like styles, the navigation palette and anchors, it's particularly well-suited to long-document creation – something free competitors such as Google Docs aren't.

Interoperability with Microsoft Word is an important feature for most users, and Writer delivers here too. Version 5 includes additional compatibility features, in particular the ability to preserve and correctly represent text highlighting in Word documents. You can even specify whether you would rather export your character backgrounds as highlighting or shading when saving to Word files.

One of our great bugbears with inserting images into word processor documents is the way they handle simple tasks like cropping. Many don't provide tools to crop an image, or if they do, you have to enter numeric values to crop – hardly the most user-friendly process. In version 5, Writer gets this right by allowing you to crop using the mouse. This sounds like a small feature, but it's a real time-saver.

Some of LibreWriter's longest-standing bugs have finally been fixed, too. Page numbers no longer become random in draft mode, and – finally – you can create paragraphs that contain more than 65,000 characters. This last one probably won't affect many users, but for those it did affect (largely in legal writing) it was a show-stopper.

Overall, Writer is a powerful word processor that costs nothing and can do almost everything Microsoft Word can. Yes, it's not as pretty - although as we note above, the old-fashioned look has some advantages – but if you want a word processor that can handle long, complex documents and you don't want to tie yourself to Microsoft, it's a very good choice. 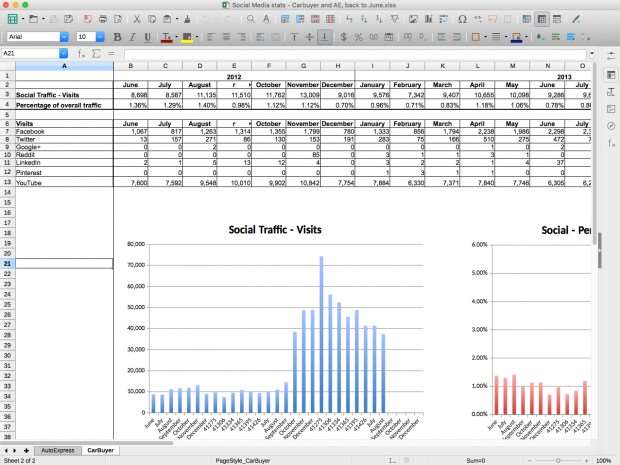 It's a mark of LibreOffice Calc's maturity that it happily opened every Excel document we threw at it, including some with complex pivot tables, conditional formatting and graphs, and all without losing any formatting or data. That's impressive: not so long ago, it (and every other non-Microsoft option) would have choked on the same documents.

If you're familiar with Excel, you'll be up to speed with Calc very quickly. All the power you'd expect is there, and of course, all the complexity too.

One disappointing area, and one that it's hard to see LibreOffice improving on in the future, is macros. Calc's macros are basically incompatible with VBA, so if you have any existing macros, you'll need to rework them. The good news is that the macro language built into Calc is very capable, so there's little you can't do with it. However, if you're someone who has spent years creating Excel macros, you'll have to relearn a lot to make the switch. 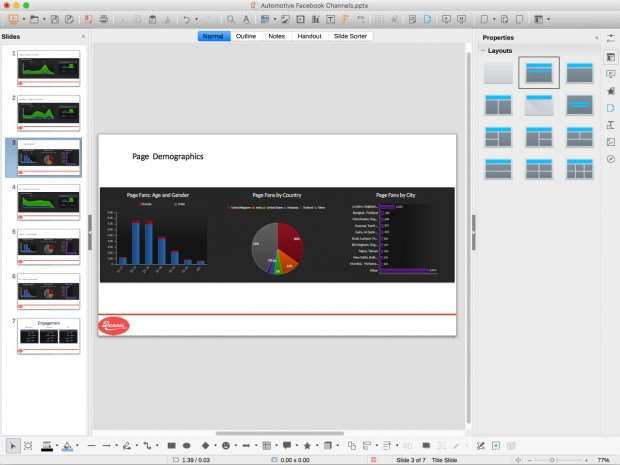 Impress, the presentations software bundled with LibreOffice, feels like the least complete of the main packages (perhaps open-source coders don't do many presentations). When importing some complex presentations with background graphics, it missed things out, so those who have a lot of existing PowerPoint files will probably want to keep a copy of PowerPoint to hand.

For creating new presentations, however, it's perfectly adequate. All the tools you're likely to need are here, including templates. One minor irritation is that you can't add comments to slide notes, which means that if you're a team preparing a presentation that relies a lot on the notes, you can't review them properly.

From a reviewer's point of view, open-source software is always the hardest to rate. It always feels vaguely churlish to give a bad review to a piece of software that unpaid volunteers have spent their free time building. On the other hand, and especially with a piece of mission-critical software such as an office suite, you need to compare it with paid-for (and sometimes expensive) products.

With this in mind, LibreOffice gets a mixed rating overall. Despite its updates it still looks and feels old-fashioned – although that has its positives as well as negatives, particularly if you're familiar with older versions of Microsoft Office. The lack of a cloud service like OneDrive behind it also means there are no collaboration features of the kind you'll find in Google Drive and that are being built into Office.

Whether that matters to you depends on the kind of user you are. Leaving aside the more underpowered elements of LibreOffice (Impress), what you have is a powerful office suite that can meet the needs of demanding users but only if they work alone or don't mind passing documents to and fro using drive services such as Dropbox. Business users, for whom live collaboration is increasingly important, will have to weigh up the positives and negatives carefully before abandoning Office.

However, if you need powerful features in a spreadsheet or word processor, you don't work collaboratively and you're on a very tight budget, LibreOffice will meet your needs very well. It's certainly worth a try.

I have read and accept the privacy policy and terms and conditions and by submitting my email address I agree to receive the Business IT newsletter and receive special offers on behalf of Business IT, nextmedia and its valued partners. We will not share your details with third parties.
Copyright © Alphr, Dennis Publishing
Tags:
document creation libreoffice microsoft microsoft office microsoft word office suite software word processor
By a Staff Writer
Aug 24 2015
4:58PM