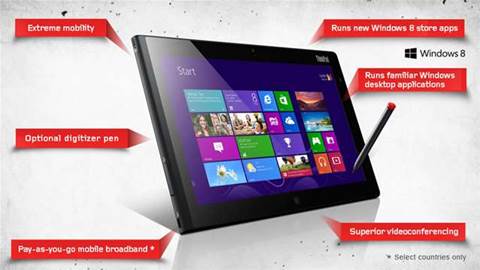 Does size matter? You'd think so the way Lenovo is boasting that it's new ThinkPad Tablet 2 is the thinnest and lightest Windows 8 tablet on the market.

Unlike the cheaper Windows Surface from Microsoft, that costs about $200 less, the ThinkPad Tablet 2 runs a "full" version of Windows 8 and not Windows RT.

It's also about 110g lighter than the Surface at just 570g although that goes up to 590g for a version with a pen and digitiser and 610g for a 3G enabled version - an option not offered by Microsoft.

The Surface Pro, at a touch over 900g, is substantially heavier.

Our only concern with the ThinkPad Tablet 2 is the processor and memory.

Equipped with an Intel Atom Processor Z2760 and just 2GB or RAM, this is not going to be a computer than do serious heavy lifting like video editing.

However, we expect that these systems will be used mainly as consumption devices for reading documents, looking at photos and watching movies rather than as potential laptop replacements.

The ThinkPad Tablet 2 offers either 32GB or 64GB of storage, like the Surface although the Surface Pro boosts that to 128GB.

In short, the ThinkPad Tablet 2 will be lighter and cheaper than Microsoft's offering but may be limited by the CPU and RAM.