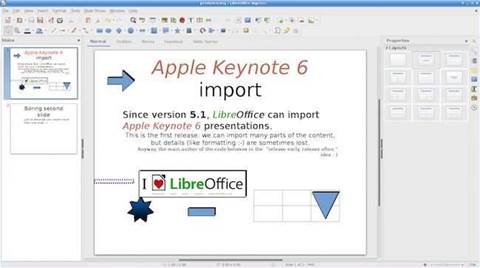 If you've been wondering whether to dip a toe into the world of open source software, the release of a new version of LibreOffice might be the spur you're waiting for.

What's open source software? Wikipedia defines it as software "with its source code made available with a license in which the copyright holder provides the rights to study, change, and distribute the software to anyone and for any purpose."

Don't let the mention of source code - the human-written instructions that are converted into the ones and zeros that a computer actually executes - put you off: open-source licences also allow people to freely distribute ready-to-run versions.

There are various philosophical considerations around open source and related software, but for most users it seems to be about not having to worry about paying licence fees - though open source projects often rely on financial support from commercial and individual users.

One example of open source software is LibreOffice, an office suite for Windows, OS X and Linux.

Like most office suites, it includes a word processor, spreadsheet, presentation software,  and a database, plus a drawing and flowcharting program and a maths editor.

Released this month, LibreOffice 5.1 features a reorganised user interface while retaining the familiar menu bar and toolbar model, as opposed to Microsoft Office's ribbon (which, a decade since its introduction, is still an irritation to some long-term Office users).

Various minor changes have been made to the individual programs. Examples include simplified navigation to a specific page in Writer's (the LibreOffice word processor) print preview mode, new regression functions in Calc (spreadsheet), and the ability to equalise the widths or heights of objects in Impress (presentations) and Draw.

The ability to open and save files from or to remote storage such as Google Drive and OneDrive has been added to the suite, and most of the programs now support Microsoft Word-style (Alt+X) entry of arbitrary Unicode characters - eg, typing 2026 followed by Alt+X gives the ellipsis character (…).

Some of the file import routines have been improved, and LibreOffice can now import Keynote 6 files.

If you're not so keen on using the latest code, there's also LibreOffice Still, the stable release that has been more extensively tested. The Still release is currently at version 5.0.4, as opposed to LibreOffice Fresh 5.1.