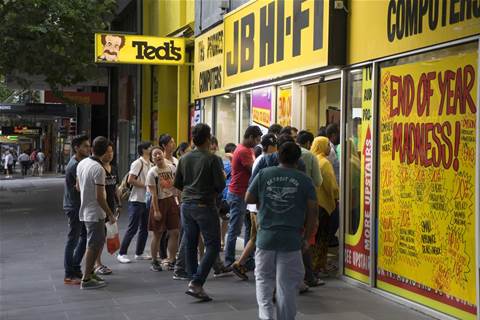 The group, which includes JB Hi-Fi and other retail brands such as The Good Guys, has released its preliminary figures for the first half of the financial year which showed the company achieving sales of $ 4.94 billion and a net profit after tax of $317.7 million.

The company did not release any figures relating to its Solutions business which targets B2B sales and services. In February 2020, the company said it remained on track to hit a long-defined target of $500 million in annual sales.

Sales grew more than 23 percent during the period which resulted in a 86.2 percent growth in net profit after tax for the period.

The company told investors that sales momentum had been strong throughout the half, citing continued elevated demand for consumer electronics and home appliances.

The retailer said that growth in online sales coupled with demand for goods mitigated the effect of store closures on the company during COVID-19 lockdowns.

The group reported that online sales grew by 161 percent over the previous period in 2019 and accounted for 13 percent of total sales.

It also revealed that it did not receive any government wage subsidies during the first half of the financial year.

“We are pleased to report record sales and earnings for HY21, in what has been an extraordinary period,” JB Hi-Fi CEO Richard Murray said in a statement to shareholders.

“Our continued focus on the customer, and investments in our online business and our supply chain, have enabled us to seemingly meet our customers’ increased demand both instore and online.

“I would like to thank our over 13,000 team members who have continued to do an incredible job and worked tirelessly during this period.

“As I have said before, our team members are our number one asset and our most important competitive advantage; their dedication and deep product knowledge continues to delight our customers every single day.

In June last year, the company reported sales growth of 20 percent in the H2 of FY2020 for JB Hi-Fi Australia and 23.5 percent for The Good Guys, offsetting a 19.3 percent decline for JB Hi-Fi New Zealand.

JB Hi-Fi said it would release its full half year results on 15 February.