Is this the future face of banks? 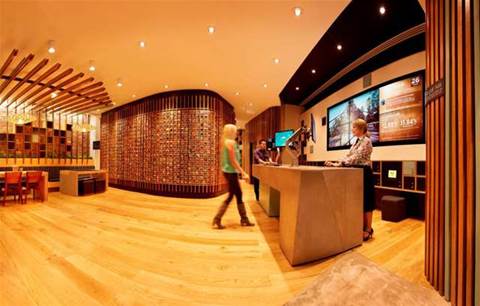 A herb wall. Automatic espresso machine. iPads for the kids. Could your business learn something from this out-of-the-ordinary credit union branch in Queensland?

Take a look at the photos below – we’ve seen contemporary design touches in banks before, but you won’t forget this CUA (Credit Union Australia) branch in a hurry.

Located in Carindale, Queensland, this is one of the first financial branches we’ve ever seen described as “organic, warm and inviting” – something we’d normally hear and think of a café or bed and breakfast.

Looking at the photos, the design incorporates what appears to be a lot of wood. There are little nooks where customers can sit down on chairs at tables. At first glance at some of the photos we could have mistaken it for a café – and yes, there is an espresso machine.


What’s interesting to us is why CUA has decided this is a good idea. The press release we received states that CUA wanted a branch that “didn’t look or feel like a bank.” They wanted to “reaffirm [CUA’s] ethos and beginnings within the community.”

“We wanted to create an environment that doesn’t just reflect the community but becomes part of the community,” states Group General Manager, Distribution, Darrin Northey. “We see our branch spaces as becoming far more than transaction and process based, or sci-fi service centres which have begun to alienate people. We want people to stop-in at our branch, to feel inspired and at home with us.”

In 2011 the Commonwealth Bank of Australia unveiled a flagship branch in Queen Street Brisbane, with iPads and touchscreens for customers to use, a “concierge” and a “café”.

From Apple’s Genius bar and in-house photo exhibitions and workshops, to this aquarium spectacle at Sony’s flagship store in Japan, the trend seems to be to approaching the shop or customer branch as more than a blank and utilitarian space - somewhere the customer aims to get in and out of as quickly as possible.

For better or worse, CUA’s new branch reminds of a prediction we read here at The Conversation, and touched on here, that the key to customer spaces in the future will be “sensory immersion, experience, events and personalised engagement.”