Is the new Lenovo ThinkPad 10 a good iPad alternative? 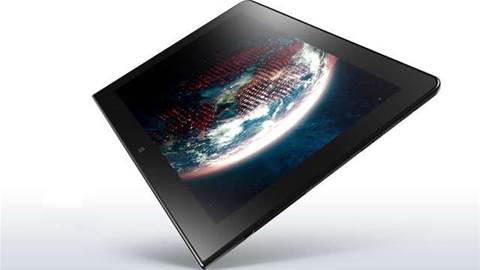 If you're already licensed for Microsoft Office, you'll most likely be able to redeploy your licenses to the ThinkPad 10.

If you read the spec sheet for the Lenovo ThinkPad 10 you'll think it reads like almost any other Windows notebook on the market. And to some degree that's true.

The ThinkPad 10 is actually a tablet, and it makes a better office tool than the iPad as it supports some useful accessories.

The ThinkPad Tablet Dock lets you connect external display, mouse, and keyboard as well as wired network connection. If you use the ThinkPad 10 in laptop mode you can choose either the lightweight Touch Case with a membrane keyboard, or directly attach the ThinkPad 10 Ultrabook full sized keyboard.

There's also a Quickshot Cover that makes it easier to use the camera for grabbing quick snaps.

The ThinkPad 10 offers several advantages for business users over the iPad and most of the Android tablets on the market. As it runs Windows, the ThinkPad 10 will run most of the same software you're already used to. With the iPad and Android, you'll need to find apps that can substitute for the apps you're already familiar with. That will cost you time and, potentially, money.

The ThinkPad 10 is designed for use both in the office and on the road. Although touchscreens are user friendly, they are not universally supported for all actions. There are some times where a mouse and keyboard are a more efficient way to work.

As far as price goes, the ThinkPad 10 starts at $799. That's a little dearer than the iPad at the entry level but once you factor in a keyboard and the software you'll need for the iPad then the difference will narrow. If you're already licensed for Microsoft Office, for example, you'll most likely be able to redeploy your licenses to the ThinkPad 10.