Is our office wiring breaking the law? 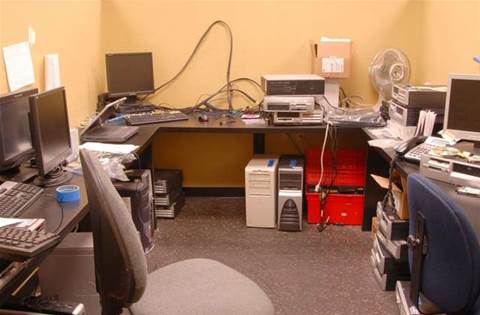 An odd office networking arrangement has one someone in Adelaide asking questions.

Question
At my office, we have Ethernet wall sockets, but in three rooms there’s one double socket and one single socket by the door, with one socket on the double plate connected to the single plate by a short patch lead.
The other socket on the double plate goes to a little switch that feeds the computers in the room, but if you unplug the patch lead, you unplug the room from the network. Computers in the room can still see each other (unless you restart one and it now can’t get an IP address etc), but they can’t see the rest of the network any more.
Newsletter Signup

I have read and accept the privacy policy and terms and conditions and by submitting my email address I agree to receive the Business IT newsletter and receive special offers on behalf of Business IT, nextmedia and its valued partners. We will not share your details with third parties.
I’m trying to work out why this is wired this way, and also wondering if it breaks a law (we’re in Adelaide, if it matters) or may be indicative of other crazy stuff inside the walls. The building was wired about four occupants ago and nobody seems to know what the deal is. Should I
be worried?
Caleb Agnes
Answer
Probably not.
This sort of setup is a simple way to make it possible to simply manually disconnect a room from the wired network, generally for security purposes of some sort – confidential stuff on the computers in that room, students doing exams on computers, that sort of thing. It’s less useful now that wireless networking is so ubiquitous, but it’s still pretty common, particularly in schools. I strongly doubt that it breaks any laws. Your office does still have the normal, entertainingly high, chance of apparently having been wired by frightened felines shoved into the walls and ceilings with cut-rate Ethernet cable tied to their tails.
(That’s why they call it Cat5, of course. Only recently have network installers managed to use six cats at once without losing one in there.)
Copyright © PC Pro, Dennis Publishing
Copyright © PC Authority, nextmedia
Tags:
hardware networking
By Dan Rutter
Feb 13 2014
6:08PM