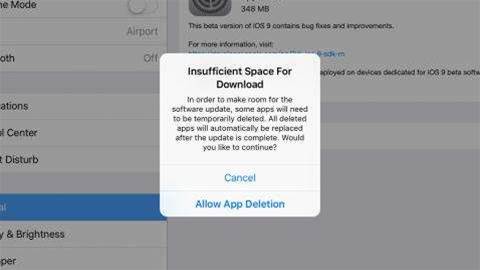 In a way this could be scary, confusing or infuriating. In another way, it could be convenient. Whichever way, Apple thinks a bunch of new space-saving features will help boost adoption rates for iOS 9.

One of the major draws of iOS 9 is the range of space-saving initiatives for users. With the latest update to the developer preview, Apple has made the svelte 1.3GB OS even more palatable.

Previous iOS installers, including that of the initial iOS 9 beta, required additional space temporarily in order to unpack files before installation. This meant that users with limited storage space – I'm looking at you, 16GB iPhone owners – had to delete applications to create room for the new update. Apple has now made this process much easier with a new feature known as “App Deletion”.

App Deletion offers those with limited space the option to automatically delete, and then later reinstall, apps. This process deletes enough to free up the required space for the iOS 9 installation.

However, it's unclear exactly which apps are deleted or whether you'll lose the data on those apps when they're reinstalled. Hopefully Apple will utilise iCloud for all app data backup before App Deletion kicks in.

App Thinning is another space-saving addition available to developers in beta 2. This feature allows developers to create smaller versions of apps for older iOS devices to make use of, by stripping out features they don't need. For example, an iPhone 4s user won't need Touch ID features, and only iPhone 6 and 6 Plus owners will be able to utilise NFC and Apple Pay integration.

The second beta also introduces Siri's new Proactive feature. This allows it to suggest actions you're likely to want based on the apps you commonly use and the time of day you use them. You'll find this on the left-hand side of the first homescreen.

The second beta also brings with it a new Notes app, new features for Apple Maps, and some minor UI changes, including a return of the Continuity feature for app switching. A few other small tweaks include new Undo/Redo buttons on the iPad keyboard, the Apple Watch app being renamed to Watch, a redesigned Podcasts app icon, and general bug fixes.

With the public beta for iOS 9 set to arrive in July, it's likely this is the last update we will see solely for developers.

I have read and accept the privacy policy and terms and conditions and by submitting my email address I agree to receive the Business IT newsletter and receive special offers on behalf of Business IT, nextmedia and its valued partners. We will not share your details with third parties.
Copyright © Alphr, Dennis Publishing
Tags:
app deletion apple apps ios software spacesaving
By a Staff Writer
Jun 26 2015
3:26PM