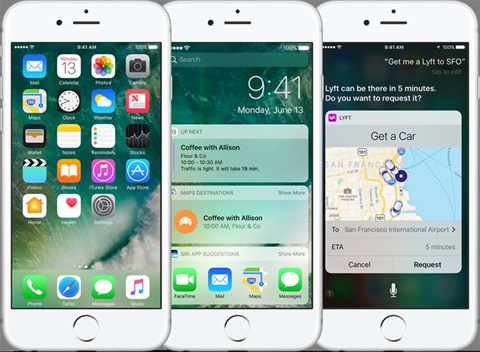 Apple has unveiled the next version of its mobile operating system.

As usual around this time of year, Apple has announced a new version of iOS, the iPhone and iPad operating system. Here's our guide to the iOS 10 features that look most promising for small business people.

Integration between Maps and your calendar (to guess where you're likely to be headed, for example) should be a convenience. And making provision for services such as Uber to hook into Maps will also streamline some activities.

You couldn't describe adding points of interest such as petrol stations and restaurants along a route as a breakthrough, but it does bring Maps closer to the functionality of a dedicated navigation device.

Interface changes such as activating the screen as soon as you raise an iPhone (rather than waiting for you to push a button), and simplified access to Notifications, Today and Control Center get you closer to important information and controls.

VoIP support in the Phone app will be welcomed by users of such services, particularly for calls that aren't included in the relevant mobile plan.

The news that Apple is allowing app developers to take advantage of Siri has a lot of potential, especially for apps that you use while driving. Actually, make that apps you would use while driving if you could do so safely.

Apple said iOS 10 will be available this spring as a free software update for iPhone 5 and later, all iPad Air and iPad Pro models, iPad 4th generation, iPad mini 2 and later, and iPod touch 6th generation.