Intel's desktop Broadwell CPUs have only just hit the shops, but already it looks as if they're redundant: at Gamescom in Cologne, Intel has unveiled the first products of its sixth-generation Skylake range, heralding a new architecture and a significant boost to integrated graphics performance.

In all, only two CPUs were revealed today, and both are aimed principally at overclockers and gamers: the unlocked 4GHz Core i7-6700K, and the 3.5GHz Core i5-6600K, both of which will go on sale immediately.

No mobile CPUs have yet been unveiled; Intel won't get to laptops and tablets until later in the year. However, the chip giant did say it would be announcing an unlocked “K” mobile processor for “enthusiast laptops” in Q3 2015, alongside the usual line-up of low-power CPUs.

Intel's Skylake announcement at a glance: 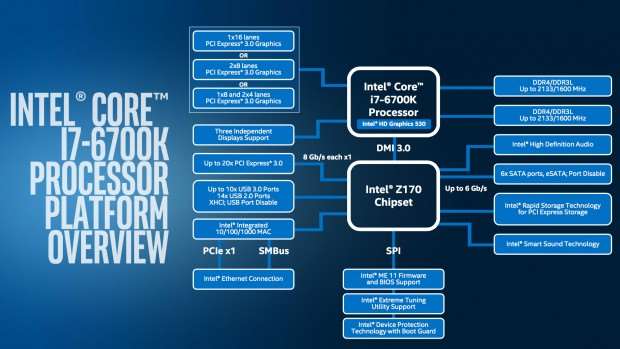 Since Skylake represents a “Tock” in Intel's Tick-Tock development cycle, the new chips will be manufactured on the same 14nm process as Broadwell, but with various architectural improvements and optimisations.

Full details on the new architecture haven't been announced yet, and won't be fully detailed until the Intel Developer Forum later this month. Since Intel chose Gamescom for its first unveiling, however, it's a fair bet that increased performance will be the prime focus.

In terms of raw specifications, the two new CPUs are very similar. Both are designed with easy overclocking in mind, with Intel boasting that its “full range base clock tuning granularity” will help gamers and PC building enthusiasts to hit the overclocking heights. (Note, though, that this feature is only available on the Core i7.)

Both chips use the new LGA 1151 socket, so you'll need to budget for a new motherboard if you're looking to buy one. There's also compatibility with DDR4 RAM, support for up to 16 PCI Express lanes and up to ten USB 3 ports. Both processors also support Turbo Boost 2 and Hyper-Threading, while the new integrated graphics GPU – Intel HD Graphics 530 – offers a claimed 20-40% improvement over the equivalent Haswell processors.

The only differences between the two new desktop processors are in raw clock speed and Hyper-Threading support. The Intel Core i5-6600K is a quad-core CPU with no Hyper-Threading. It has a base frequency of 3.5GHz and will Turbo Boost to maximum of 3.9GHz (on a single core). The quad-core Core i7-6700K does support Hyper-Threading, runs at 4GHz and Turbo Boosts to 4.2GHz. The TDP for both CPUs is 91W.

The prices below represent US wholesale prices. There are no official Australian RRPs yet (most people will buy these CPUs as part of a pre-built system after all) but you can find the i7 for around $550, and the i5 for $330.

I have read and accept the privacy policy and terms and conditions and by submitting my email address I agree to receive the Business IT newsletter and receive special offers on behalf of Business IT, nextmedia and its valued partners. We will not share your details with third parties.
Copyright © Alphr, Dennis Publishing
Tags:
desktop processors hardware hyperthreading intel intel core intel developer forum intel hd graphics
By a Staff Writer
Aug 7 2015
1:40PM