Intel giving away 1 Ultrabook every week 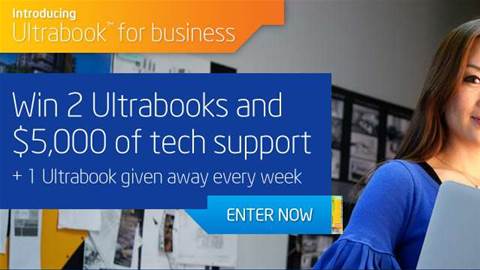 Submit a business tip on the Intel Facebook page and you might win an Ultrabook, or $5,000 of tech support.

We’ve told you about a few discounts and competitions for business tech, but this one is particularly interesting, because there is serious hardware up for grabs.

Starting this week, for seven weeks, Intel is giving away a stack of Ultrabooks. There are seven to be won, and Intel will give away one a week. Plus there is a grand prize in seven weeks’ time of 2 Ultrabooks and $5,000 of tech support. A disclaimer: Intel are advertisers on this site, and are advertising this competition on this site.

As we’ve explained here, Ultrabooks should definitely be on your shortlist if you are looking for a small business laptop. It’s for the same reason they make good machines for watching movies and doing non-work tasks - unlike ultraportables built in the past, these are built to be relatively light, but also have the sort of performance that makes them capable as your main system.

We’ve tested several, which you can read about here. While the top end finds systems well over the $2,000 mark, there are also some close to $1,000. The cheaper alternative is a netbook, which won’t last long for serious computing, or a full size machine, which more often than not will be too heavy to carry around for extended periods of time. One of the BIT team is nursing an injured shoulder we suspect could be due in part  to the 15in system we’ve been lugging to and from work.

Our tests have shown that battery life is also respectable. The ASUS Zenbook UX31 in particular, is a standout, lasting three hours in our punishing heavy use test (which means in regular use you might get an hour or more on top of that).

So how do you win one? To enter, you go the Intel Australia Facebook page. Once you’re there, you have to Like their page, and “share a business tip that shows why your business is responsive, smart performing, sustainable or visually smart”.

The good news is everyone in your business can enter once, as long as they each have a Facebook account. Although we note the Intel page says if your business’s entry wins, it is up to the business owner whether they give the prize to the person that submitted the entry. We expect you’ll fight hard for that one.

Your business has to have 200 or less employees and anyone entering has to be over 18 and a resident of Australia. Judges will pick a winner from the ten tips submitted each week with the most votes.

This week’s competition ends June 4 at 9:59am AEST.

We also spotted a clause in the competition that says that by entering, you agree to take part in a video promoting your business and also showing off the Ultrabook. So a bit of publicity for your business too.

Disclaimer: the Intel Australia "Win an Ultrabook" competition is being advertised on this web site (BIT.com.au).