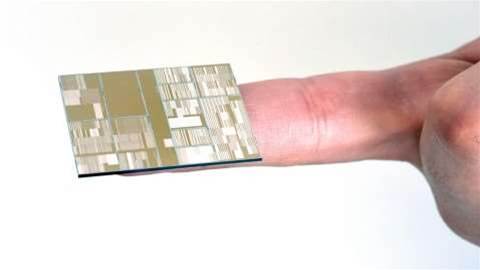 This might not seem immediately relevant to your business but make no mistake: a new test chip should result in a 50% gain in speed over current processors

IBM Research has just announced a major breakthrough in chip manufacturing, and IBM believes the research will result in a 50% increase in processing speeds. Although the chip has working transistors, it won't be powering your laptop anytime soon; IBM says it will take a while for the technology to be refined for commercial use.

The development is the work of a joint project between IBM Research. GlobalFoundries and the State University of New York, and has already cost $3 billion (£1.9 billion) in research. The technology used in the microchip should usher in a range of superfast, compact processors, and continue Moore's law for the near future.

“It's a major step,” said Mukesh Khare, vice president of semiconductor technology at IBM Research. “We have been working on this technology for more than five years.”

The power and density of a microchip hinges on the size of its process node. Generally, the smaller the technology, the faster the chip's potential, and the more compact it can be. Today's fastest chips use minute, 14nm technology (14 billionths of a metre) and, incredibly, IBM's latest test chip halves that amount. Denser and more powerful, the new technology uses devices only three times wider than a strand of human DNA.

To make the leap to 7nm, IBM and its research partners had to develop new methods to produce key areas of the chip. To increase performance, IBM added a layer of silicon germanium to the test chips' transistors. Elsewhere, the company used newly developed extreme ultraviolet (EUV) lithography to etch even smaller patterns onto the chip's silicon wafer.

What does it mean?

In top end machines, it means faster performance. But the 7nm process could also lead to something Intel has been spruiking for a while: "ubiquitous processing". With chips this small, every object from your socks to your fillings could (but not necessarily will) have a chip inside it, reporting data to... something.

For business, it could lead to ultra-cheap WiFi-and-GPS-enabled labels. Slap a sticker on your package, and track it wherever it goes. Or chips embedded in the tabletop at restaurants, allowing diners to just tap-and-pay. The possibilities are almost endless.

I have read and accept the privacy policy and terms and conditions and by submitting my email address I agree to receive the Business IT newsletter and receive special offers on behalf of Business IT, nextmedia and its valued partners. We will not share your details with third parties.
Copyright © Alphr, Dennis Publishing
Tags:
chip manufacturing hardware ibm research moores law mukesh khare state university of new york technology test chip
By a Staff Writer
Jul 10 2015
3:19PM