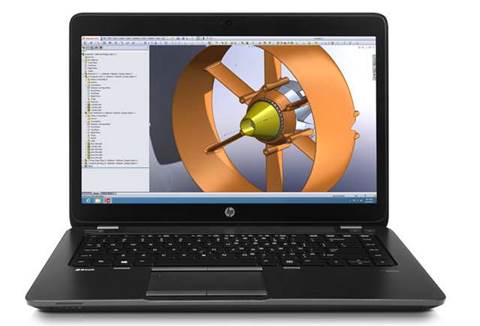 For videomakers, engineers, photographers, designers and others that need performance and a Thunderbolt connection, HP has unveiled its ZBook range of high-end laptops.

If you are mostly using Microsoft Office and a web browser, practically any mass-market laptop can do the job.
But people in certain occupations can take advantage of all the processing power a manufacturer can throw their way, and they do not want to be tied to their desks.
Newsletter Signup

I have read and accept the privacy policy and terms and conditions and by submitting my email address I agree to receive the Business IT newsletter and receive special offers on behalf of Business IT, nextmedia and its valued partners. We will not share your details with third parties.
So it's with interest we see HP has unveiled a high-end Zbook range of laptops with people like videomakers, engineers, photographers and designers in mind.
The HP ZBook 14 costs $2,445 and is described as "the world's first workstation Ultrabook." It is offers a relatively high-end Core i5 or i7 processor and AMD FirePro M4100 graphics with 1GB dedicated memory, and there's a choice of up to a full HD (1920 by 1080 pixels) screen and a 1600 by 900 pixel ten-point multi-touch screen. The nominal weight is 1.62kg.
Note there's no Thunderbolt connector on the Zbook 14 for high-speed connections to external storage and screens, but there is on the ZBook 15 ($2,999) and 17 ($3,299). They have bigger screens, more powerful processors and provision for larger amounts of memory.They also provide the option of HP's 'DreamColor' display technology (originally developed in conjunction with DreamWorks Animation SKG) to deliver accurate and consistent colour.
Copyright © BIT (Business IT). All rights reserved.
Tags:
14 15 17 hardware hp laptop thunderbolt ultrabook zbook
By Daniel James
Oct 16 2013
12:41PM