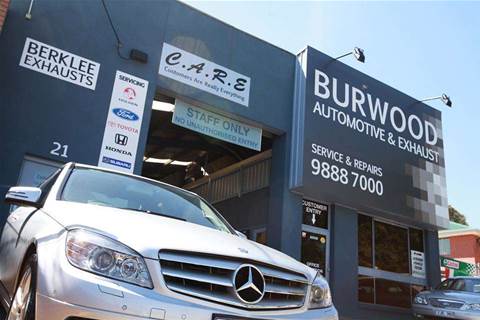 No matter what business you're in, secure online communication with your accountant can be a real timesaver.

Burwood Automotive and Exhaust is a car servicing business in suburban Melbourne. Co-owner Jen Edwards explained that while she takes care of the administration side of the business, she has chosen to outsource the bookkeeping and accounting aspects to Michael Beks & Associates. "He has his job, and I have mine," she says.

She chose the firm on the basis of a personal recommendation, and now agrees that "Michael's really good." But the fact that Michael Beks & Associates is based some 270 kilometres away in Warrnambool did present a few problems where physical documents were concerned, for example when tax returns or activity statements had to be signed.

Australia Post was taking as long as six weeks to deliver, and there were examples of envelopes being returned undelivered a month after they were mailed, she said.

Things became a lot easier when the firm started using MYOB Portal as soon as it became available earlier this year.

"The communication's a lot easier," says Edwards, as documents can be delivered in a matter of moments and legally-binding digital signatures applied immediately.

"We find it to be very efficient," says Beks. Not having to print and mail documents saves time and money, and Australia Post is not as quick and reliable as it used to be, especially in regional areas, he observes.

"It's saving a considerable amount of time at this end," he says, and clients can complete tasks when it suits them and without having to visit the office or wait for the post.

But it's not just about documents for signature. Edwards also uses MYOB Portal as a secure channel for providing Michael Beks & Associates with payroll information, and for reconciling BankLink transactions that the firm doesn't recognise. "It's a lot more efficient, and a lot less paperwork," she says. It also serves as an archive: "It's all there... we can go back and look at everything."

Edwards says she acts as a bridge between the workshop and the accountant, and MYOB Portal means she can handle many tasks wherever she happens to be. "It's actually saving me loads of time," she says, as she now only needs to go into her office twice a week rather than the four times that were previously necessary.