How long does the Samsung Galaxy S III battery last? 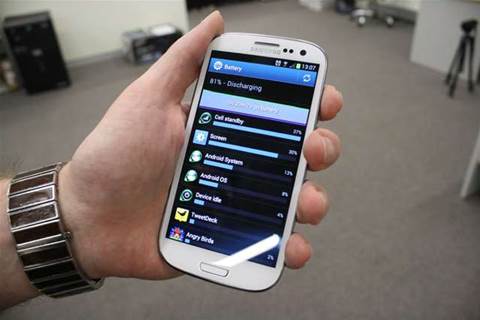 How long does the battery on the Samsung Galaxy S III last? Half a day? A day? Two days? Here's what we found over a 24-hour period.

We've been road-testing the Samsung Galaxy S III since its release. Here's a typical day of how we used it to see how the battery performs.

Overnight: Charge up. We also set an alarm for a 6.00AM wake up the next morning.

6:00AM: We were woken by the alarm we set the night before using the included clock application. As an aside, using an alarm that includes the sound of running water provided some extra incentive to get out of bed

6:20AM: After a shower, we checked email in our personal and work accounts. There was also an overnight text message from an insomniac work colleague waiting for a response. Thankfully, we put the phone on silent mode before going to sleep so the alert tone didn't wake us up.

6:30AM: Checked out of the hotel and headed to the airport. Used the web browser to check that there were no flight delays and checked the weather at our destination.

7:15AM: We've boarded the plane and have sent texts to our wife seeing how they passed the night at home and a sibling whose son was arriving back from an overseas trip to see if we'd be arriving at the same airport at the same time. There's also a quick spot of checking out Facebook.

7:30AM: The SIII goes into flight mode for the 90-minute flight and says in a pocket.

9:10AM: Flight mode is off and we're reconnecting to the world. The first call we make for the day is for the car parking service we use at our home airport to collect us so we can drive back home. While waiting for the pickup service, we check a few emails and send a couple of text messages.

BATTERY LEVEL: 83%. A look at the battery settings tells us that 73% of the Galaxy S III's power consumption comes from the screen and 15% from the cell phone radio. The rest is being used by the operating system and applications running the background. Collectively, this accounts for less than 10% with the WiFi and Bluetooth covering the rest. 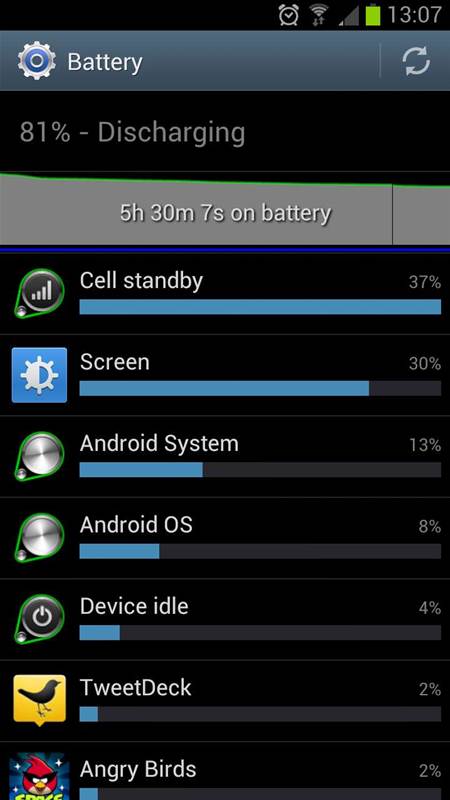 9:30AM: A couple of text messages sent, a few emails checked and two calls made before leaving the airport and heading home.

11:00AM: The trip from the airport to home was 50 minutes during which we connected a Bluetooth headset. Once at home, we took a photo that we shared over WiFi using Facebook, checked voicemail and made a couple of calls using the speaker phone. Until now, the WiFi had been switched off. GPS is on but we haven't used any GPS-dependent apps.

BATTERY LEVEL: 63%. The screen is still the dominant power hog, using 64%. The voice calls we've made account for 6% of consumption with just over 10 minutes spent on calls.

2:15PM: Lots of email has come in but very few calls. The Samsung is connected to the office network over WiFi.

BATTERY LEVEL: 43%. The screen is has consumed 54% of the battery with the cellular radio responsible for a quarter of the battery use. Interestingly, Exchange Services, for connecting to a corporate email account, accounts for 2% of the power drain. It's not a lot but is worth noting (read our explanation of Exchange ActiveSync).

6:00PM: The afternoon has been atypically quiet with very few calls. The Galaxy S III has been collecting emails and SMS messages but otherwise, not doing a whole lot.  Having made it through the work day and barely using it for the last three hours, the SIII has just 31% of its battery remaining.

The problem with “scientific” battery tests is just that – they are controlled so that you can make comparisons between two similar devices. However, the real question that needs to be asked is “How will you use the phone?”.

In our use, which was just a random day in our week - we didn’t intentionally choose to test on a day when we were going to be especially quiet or busy. If, instead of being in the office all afternoon, we were out then we suspect that the battery would have run out of juice in the mid afternoon.

While in the office, we used the landline for calls and our computer for email. If we’d been out, the screen on the S III - easily the main battery hog - would have been on a lot more and we’d have made several more calls. The Bluetooth would have been used while we were in the car.

While many people will find that they can get through a day between charges, some will need to avail themselves of Samsung’s option for a second battery and desktop charging cradle as well as a car charger.