How long does the Google Nexus 7 battery last? 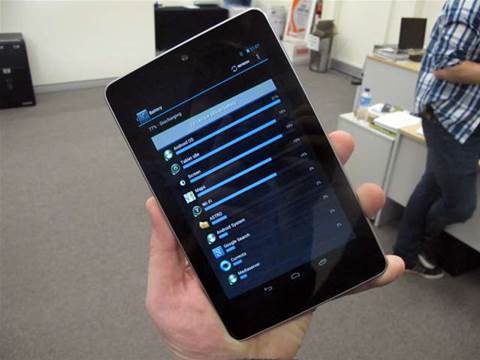 How long does the battery on the Google Nexus 7 last? 10 hours? A day? A couple of days? Here's what we found over 24-hours.

We've been testing Google's new Nexus 7 tablet for the last few days. As part of our testing, we took it on the road for a full day to see how its battery performed in the real world. Here’s what we found.

5.00 AM: The plan was to start the day with a full charge but we forgot to charge the Nexus 7 up so we started the day with just 22%. We charged on the AC for an hour before leaving home and made it to 53%.

6.00 AM: Drive to the airport. Plugged to Nexus into the power the inverter in the car. Arrived at the airport 50 minutes later with 88% power.

10.30AM: Finally arrived at destination. Read an e-book for about 15 minutes and then played a game for about the same time while on the plane. For the last couple of hours I've been in flight mode. Battery is now down to 70% with the screen responsible for two-thirds of the consumption. The rest is evenly spread between apps I've used.

12.30PM: Between traffic hassles and other delays, we arrived at our meeting late. The Nexus 7 was meant to be out main note taking device but very few notes were needed. Although the device was on, we didn’t use it much other than to check a few contact details. Battery was at 60%.

4.20PM: It's been a busy afternoon of meetings but we’ve not used the Nexus 7 much other than checking a few emails using free WiFi. We've settled in at the airport lounge for a return flight. We're down to 52% even though use has been light. As expected, it's the screen that's chewing up battery with 70% of the juice being consumed by coloured pixels.

5.30PM: Mid-flight and all is well. We're in flight mode, playing Monopoly, and filling in some downtime during our short flight. Although the game is visually appealing, we get bored after 20 minutes and power down for the rest of the flight with the battery sitting at 43%.

7.45PM: On the ground and at my last meeting for the day. I've been in Flight Mode for the last couple of hours the battery level has fallen to 34%. WiFi is back on and we have connected to a WLAN.

9.45PM: Despite starting the day with less than a full charge the Nexus 7 has made it through a long day without needing a trip to the charger. The battery still has 17% of its full charge remaining. Our last meeting lasted just over an hour with the device on the whole time as we took notes and were connected by WiFi.

So, despite starting with less than a full charge and having a fairly long day, the Nexus 7 has cruised through without the need for a trip to the charger.