How inkjet cartridges are made

A glimpse into the super-heated world of inkjet cartridges, a household item we all take for granted

An inkjet cartridge. It's become a household object in the same way as cups, pans and the cardboard boxes they arrive in, but this is no common or garden creation: inkjet cartridges are just as much a piece of high-tech gadgetry as the processor in your computer, and just as fascinating.

It's fascinating because to create an ink cartridge you need to get down to molecular level: with modern HP cartridges, we're talking about resistors heating up a film of ink 0.0001mm thick at an equivalent rate of 200,000,000⁰C/sec. That bubble pushes a 4-picolitre droplet of ink out of an orifice at 50km/h. To put this into perspective, one teaspoon of ink would hold 1.25 billion of those droplets.

This is precision engineering.

What's more, the research behind inkjets isn't just happening in remote countries: it's taking place just outside of Dublin, at HP's research and manufacturing facility. I travelled there to speak to Stephen Smith to find out exactly how inkjet cartridges are made. Or, to be more precise, the interesting bit: the print head that controls how that ink journeys from cartridge well onto the page.

As with so much in tech, it all begins with a wafer. “Many years ago we changed from sand [blasting] to laser so we could get more dies per wafer,” said Stephen, who claims the switch boosted yields from 20 dies per wafer to 250. It's these tiny hotplates that will eventually heat up the ink and jet it onto the paper.

The next step is to build a barrier layer, which exists for three reasons. One: it simply creates the chambers through which the ink will eventually flow. Two: it's a layer of electrical protection. Three: it's an adhesive surface – the orifice plate needs to stick to something, obviously. Sorry, you don't know what an orifice plate is? Well… 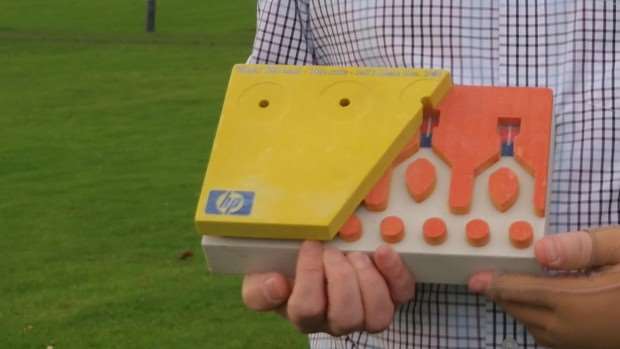 The brilliantly named orifice plate is a 25-micron-thick sheet. “It's a third of the density of the hairs on your head,” said Stephen, although he revised that figure upwards for my thinning crop. This controls the amount of ink being sent through the chambers in the barrier layer via a “matrix of apertures”. You can get an idea of what it looks like from the photo above, which is a scaled-up model of the chamber once it's been created.

You now have to attach the orifice plate to the wafer with its barrier layer. To be precise, they're laminated on, which protects the die from the corrosive effects of the ink.

Our wafer, with those 250 dies, now needs to be cut up. HP uses diamond-coated blades for extra precision, which means they can now be picked up and placed onto the Tab Head Assembly (THA).

It's just about now that you'll start to recognise what HP has created. If you've ever taken more than a passing glance at the print head, you'll be familiar with the golden-brown strip. That's the coverlayer, in HP parlance. This is laminated over the circuit for two reasons: one, again, to protect it from the corrosive ink; two, to stick it onto the cartridge body itself. 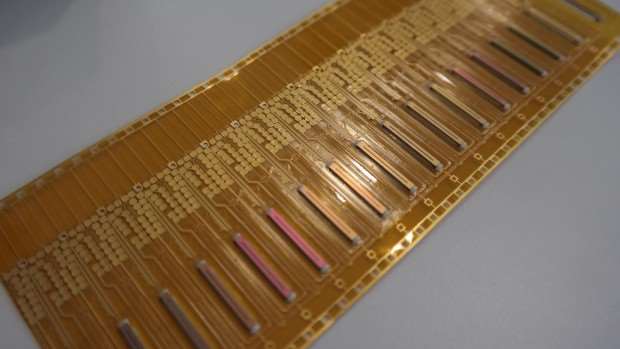 Sadly, this is nothing to do with Martinis and Aston Martins: HP uses a combo of temperature and pressure to bond the die to the flexible circuit, and that creates the Tab Head Assembly.

And we're very nearly there: the penultimate step, in terms of the print head, is a protective one of “encapsulation”, or encap for short. It effectively covers any exposed areas of the THA just in case that ink interferes with any part of the electronics.

Step 9: Slap it on the cartridge 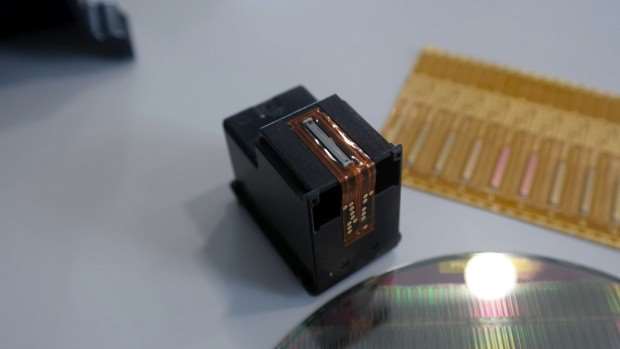 Okay, “slap it on the cartridge” perhaps oversimplifies things, but the final step is precisely that. Although even the outside of the cartridge is of interest to your inner ink nerd. If you take a look at the top of most HP inkjet cartridges, you'll see they still use a paper label.

HP has been making cartridges in Dublin for over 20 years, and it's amazing to think that the cartridges they first made back in 1994 are still being created elsewhere. Although these legacy cartridges aren't made in Dublin, they're still sent back to HP's testing labs in the facility to check for faults.