How businesses are using Dropbox as a 'data hub' 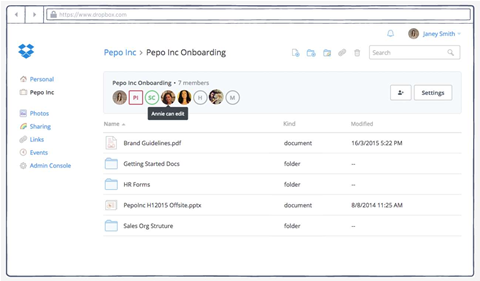 The cloud storage service is now being used to connect apps and people, according to a Dropbox executive.

As Dropbox is widely supported, this provides a convenient way of connecting different apps and users. It serves as "a data hub for small businesses," he said.

For example, people are using the iAnnotate app to annotate and share PDF documents, and that works with Dropbox as well as Box, Google Drive, iCloud Drive and OneDrive. There's no need for users to build such integrations for themselves, Baesman said, as the developers have done the work.

Where Dropbox started out as a way of allowing users to keep their files synchronised between multiple devices, the company's focus has shifted to businesses, with the goal of providing a "centralised knowledge hub."

One example is the relatively new team folder feature (for Dropbox for Business) that allows an administrator to ensure staff can see the items all the items the business wants them to see, and that they can access the appropriate departmental folder. This is a potential boon for small businesses that don't have an intranet, enabling teams to share and access key documents.

It's about getting the data you need, when and where you need it, Baesman said. This can include a small retail or hospitality business sharing duty rosters with its casual and part-time employees, he suggested.