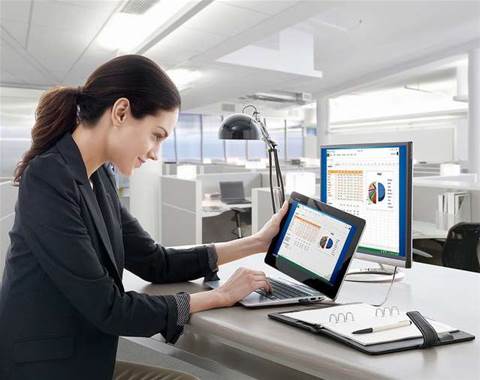 Want to use a tablet and laptop, and also use your computer at your desk a lot? ASUS's new Transformer Book Trio does all three.

[Ed: There's been a big move over the last 12 months to encourage laptops users to consider switching to a combo computer - a laptop and tablet in one. It's potentially a useful device - you've got a tablet and a laptop with you wherever you go - although we must say these devices aren't perfect (not all the devices we've seen are as light as some stand-alone laptops). It looks like the trend isn't going away anytime soon, as you can read about below.]

While laptop devices with detachable screens that act as a tablet are becoming increasingly common, Asus has taken things a step further and released a "three-in-one" that can also be used as a desktop computer.

The 11.6-inch laptop has dedicated processors inside the keyboard and the display that can work independently when the display is removed from the keyboard dock, which Asus calls the “PC station”.

This enables the PC station to be connected to an external monitor (not supplied) and used as a Windows 8 computer while the display is detached and used in tablet mode by another user, effectively allowing for two simultaneous users.

Both devices can switch between Windows 8 and Android 4.2 (also known as "Jelly Bean").

The keybaord (PC station) also comes with quite a few ports, including 2 x USB 3.0 ports, Mini DisplayPort and Micro-HDMI; .The tablet part has dedicated microSD card slot for expandable storage.

The Transformer Book Trio will be available in Australia from late November with a recommended retail price of $1,599.

What if I want a two-in-one laptop?

If the three-in-One sounds a bit too elaborate for your tastes, Asus also has a Windows 8 hybrid laptop in the Transformer Book T100, which comes with a detachable 10.6-inch tablet display.

Battery life sounds impressive (on paper at least), with Asus claiming up to 11 hours battery life and up to 14 days of standby time.

A big difference between this computer and the Trio is the processor - be aware that the T100 has Intel's new Intel Atom Bay Trail quad-core processor, unlike the Core chip in the Trio. The Atom chip should have better performance than older Atom devices, but it's not the same as a Core for running heavy workloads.

The Transformer Book also has with 64GB of onboard storage, a USB 3.0 port and a MicroSD card slot.

What if I just want a laptop?

There is also a new version of the Asus Zenbook Ultrabook. Asus has this time around decided to cover the outside of the notebook with Gorilla Glass 3, which the company claim offers superior scratch resistance and improved overall toughness.

What’s interesting here is that despite the incredibly thin design, Asus was able to squeeze in a discrete NVIDIA GeForce GT 730M graphics in addition to the integrated graphics of Intel’s Haswell processor, which is handy if you need to do more graphics intensive tasks such as video or photo editing. Prices start from $1,799 and available from in stores from late November.