Here is another new "first server" 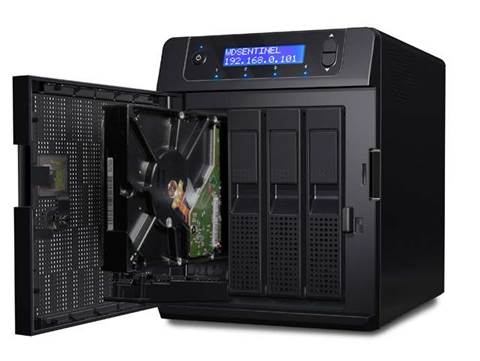 If you’re looking for a dedicated server but have limited space then here is something that might be of interest.

WD have just released an ultra-compact Intel based Windows Server, the WD Sentinel DS5100 AND DS6100.

The 4-bay servers come with Intel Xeon processors and are pre-installed with Windows Server 2012. The four bays come pre-populated with WD’s "enterprise-class" hard drives that differ in capacity and price depending on the configuration you chose:

WD says that the servers are for small businesses that are after a low-cost, turn-key solution with no assembly required and a small footprint. According to the press release, “the servers can automatically backup and restore software for up to 25 users and 50 computers”.

According to WD's press release, the advantage of going with a dedicated Windows server such as the WD Sentinel is that it can run thousands of Windows Server applications. Dedicated servers are also handy if you plan on sharing and backing up data to and from a large number of workstations around your office.

However if you don’t have a need for the raw performance that a dedicated server brings to the table, you might be better served with a NAS device such as a Synology DS1513 (which costs $899), particularly if scalable storage and backup for a small number of workstations (1-20) is going to be your primary use.