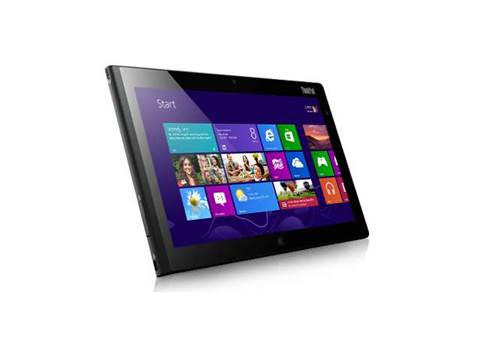 Lenovo's new Windows 8 tablet will touch down in Australia in November.

The ThinkPad-branded tablet will be officially unveiled in line with Windows 8 in late October and will start shipping locally and globally in November, Lenovo told our sister site CRN.

A pre-production model of the tablet, sighted by CRN yesterday, confirms Lenovo's previous announcement of a 10in, 9.8mm slate running on an Intel x86 chip.

Lenovo's director of products and solutions David Heyworth told CRN the tablet would have similar ruggedisation as the PC maker's ThinkPad line of notebooks.

The tablet offers 8MP front and 2MP back cameras, with SD and micro HDMI ports, a 10 hour battery life and 1366 x 768 IPS display. The tablet is 4G capable but is unlikely to be compatible with Australia's LTE networks. It also boasts NFC capability.

It will retain the stylus seen with its predecessor, and can be bundled with an optional keyboard, as well as a dock with three USB ports and an Ethernet jack. The pre-production model has the ThinkPad branding on the back of the tablet and the Windows logo sitting on the home button

Lenovo declined to comment on pricing, but the company's North America boss David Schmoock previously said Windows 8 x86-based tablets will retail for $US600 to $US700.

The tablet was first unveiled in early August, as Lenovo celebrates its 20th birthday.