Handy Windows 8 tip: you can run the "classic" desktop on a second screen 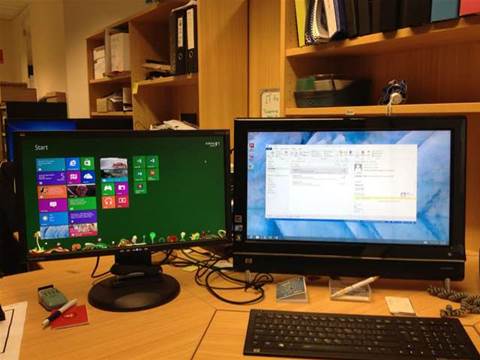 Here's something we didn't realise would be this easy - running apps like Excel and Word on one screen, and new Windows 8 apps on the other.

If you're playing with Windows 8 but don’t like the swapping between the classic desktop (the one that looks like Windows 7) and the new tiled Windows 8 interface there is an easy way around it - use two computer monitors.

We've discussed the advantages of using two computer screens before, but with Windows 8 it's possible, and very easy, to set things up so that one screen displays the familiar desktop and the other shows Windows 8's new face.
The trick is to use the "Expand the Desktop" option in the display properties.
Newsletter Signup

I have read and accept the privacy policy and terms and conditions and by submitting my email address I agree to receive the Business IT newsletter and receive special offers on behalf of Business IT, nextmedia and its valued partners. We will not share your details with third parties.
We found this really hand as there are a number of new Windows 8 apps we quite like, but we still need to fall back to desktop applications like Word and Excel. This way, you can run them side by side.
Copyright © BIT (Business IT). All rights reserved.
Tags:
desktop screens software tip two windows 8
By Anthony Caruana
Dec 5 2012
10:48AM